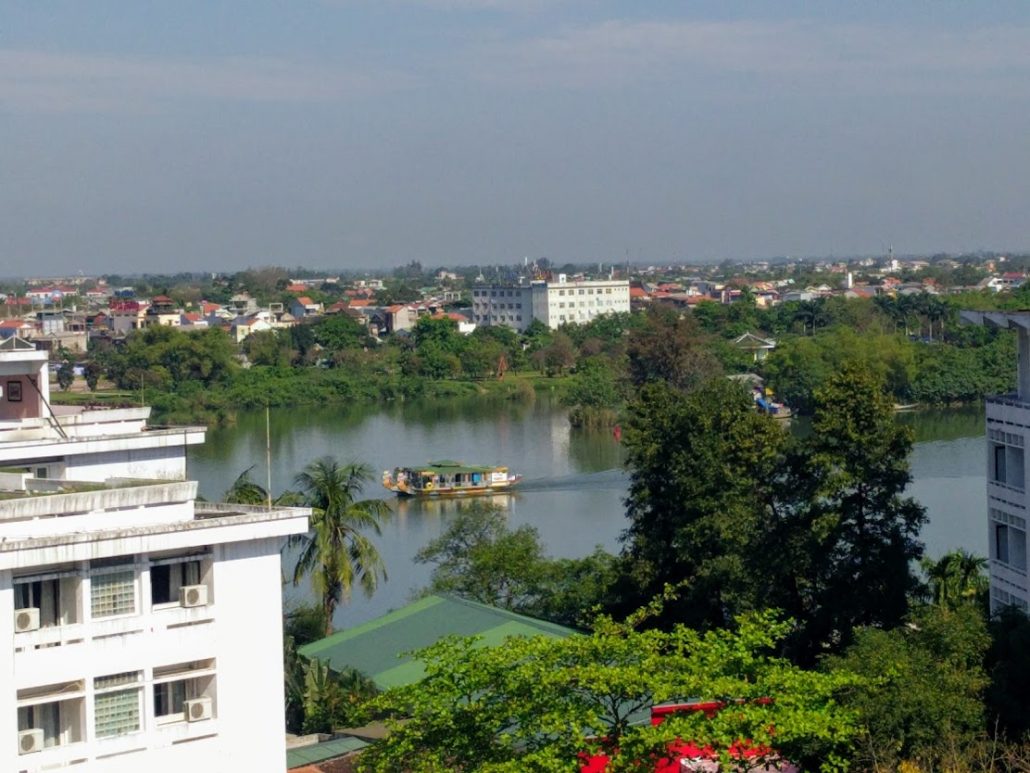 Dynasties and Leprechauns in the City of Hue, Vietnam

So much History … so little time to take it all in!  Fortunately, we had Phan Thanh Vinh, the owner and founder of VM Travel, to make sure we saw the highlights of the city without missing out on the vibrant social scene. 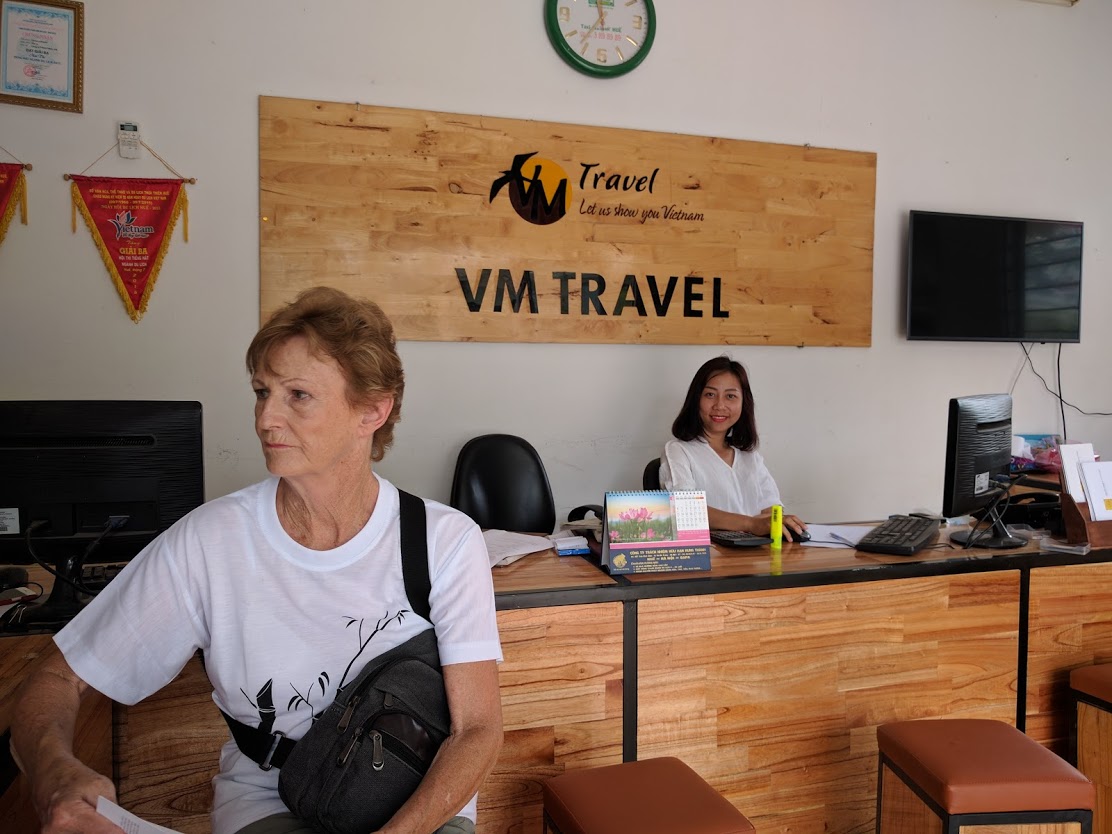 The day after we arrived, we met Vinh at a coffee shop (one of literally hundreds in Hue!) about a block from our hotel.  He briefed us on VM Travel and the impressive range of services the company offers.  He also recommended an itinerary for us which included the Imperial City and two of the Nguyen Dynasty Tombs.  We were ready to start exploring but first, a little information on Hue and the Nguyen Dynasty.

Located in Central Vietnam along the banks of the Perfume River, Hue was the capital of Vietnam between 1802 and 1945 under the rule of the Nguyen Dynasty (to pronounce Nguyen just change the Ngu to a W.  That’s close enough!)  The walled Citadel and Tombs are testament to the glory and opulence of this period.  The last of the 10 Emperors “abdicated” in favor of Ho Chi Minh’s revolutionary government.

Unfortunately, the people and buildings of Hue suffered tremendously during wars with the French and, most recently, during the Battle of Hue,one of the longest and bloodiest battles of the Vietnam War.   Located just south of the DMZ, Hue was overrun for a short time by the Viet Cong who proceeded to slaughter close to 3,000 people suspected of being sympathizers of the South.  In retaking the city, the American forces had to use heavy artillery and air support, resulting in extensive damage to the ancient buildings.

Despite this tragic past, we found the resilient people of Hue to be extremely friendly and welcoming.

And so our first morning tour began when we met our English speaking driver, Son (pronounced Shoon), from VM Travel and were driven six miles (10Km) into the Chau Chu mountain area where the tomb is located.  We think this mausoleum is a “Must See” because its architecture and location (on a hillside) is completely different from other tombs. 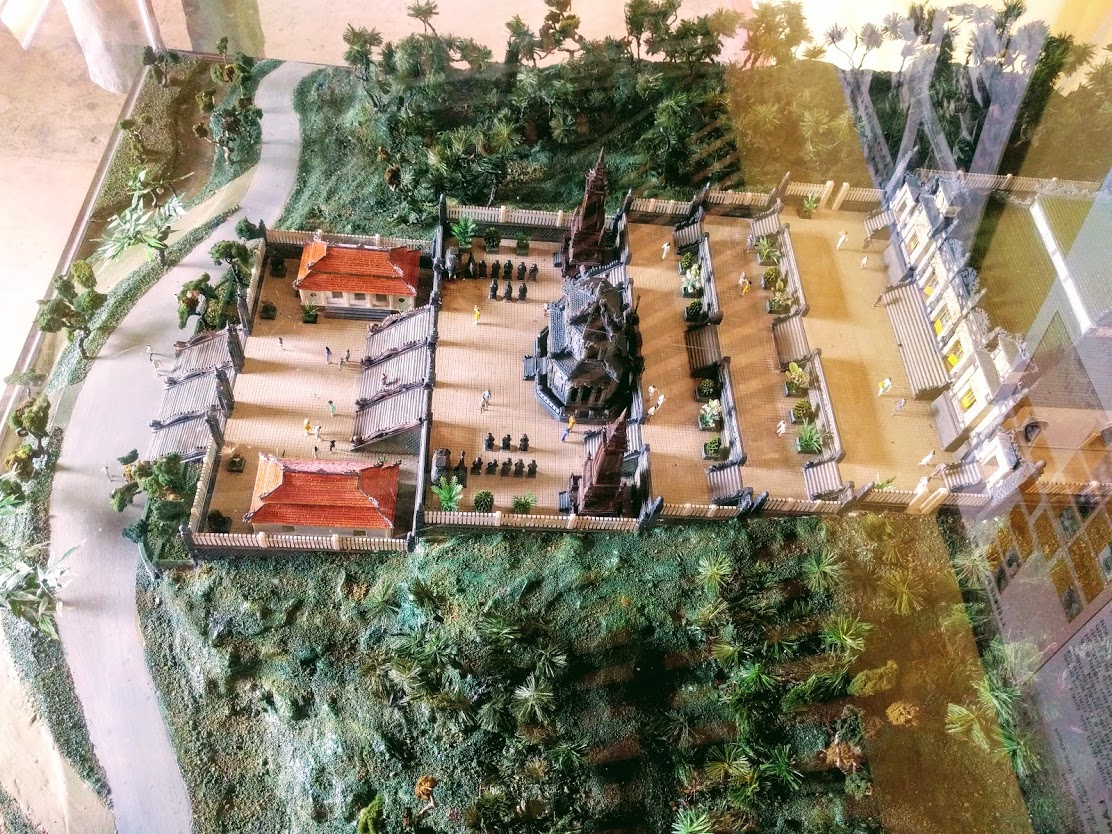 Khai Dinh was the second to last Emperor of the Nguyen Dynasty, ruling from 1916 to 1925.  A very unpopular Emperor, he was considered a puppet of the French and, more importantly, the construction of his grandiose tomb took eleven years to build, cost a fortune and resulted in a 30% tax increase for his people.  This was not well received, as you can imagine!

Son warned us that in order to appreciate the Tomb – and the view – we would have to walk up 127 steep steps to the 4th level but it would be worth it!  Built in a combination of Vietnamese and French architectural styles, the black concrete outer walls are somewhat grim and uninviting. 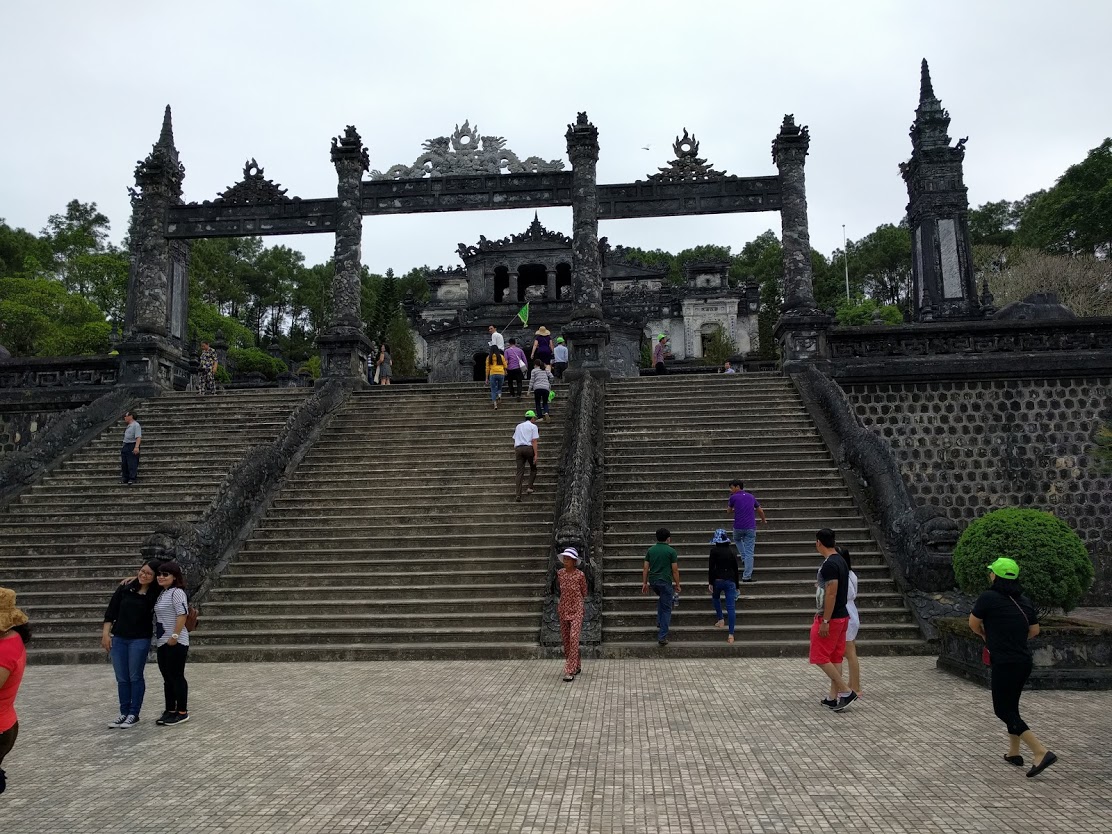 However, as we climbed, the view from each level became more spectacular and once we entered the main building on the fourth level we were mesmerized!  The walls and ceiling are completely covered with intricate inlaid porcelain murals (all done by hand, of course), and in the rear of the room, a gilt bronze statue of Khai Dinh sits on top of his grave.  Wow! Such extravagance! 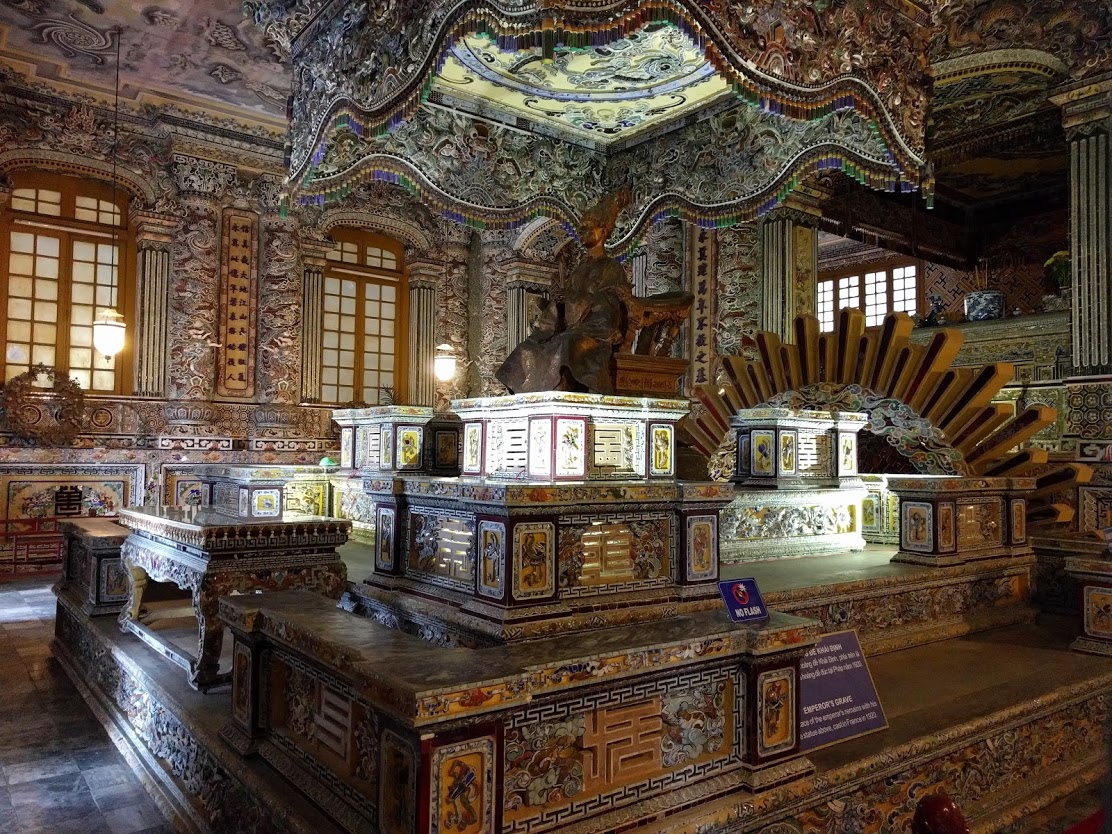 We retraced our steps … very carefully! … and Son was waiting with a bottle of water to refresh ourselves when we made it to the bottom.  Then we were off to Emperor Minh Mang’s Tomb, considered by many to be the best Tomb of all.

After a short walk from the parking lot we entered the Main Gate Area and proceeded through the courtyard displaying statues of mandarins, horses and elephants.  The site leads you through exquisite temples and pavilions (beautifully restored) until you reach the actual tomb where Minh Mang is buried.  This is locked and only opened one day a year on the date of his death so we have no idea what it looks like. 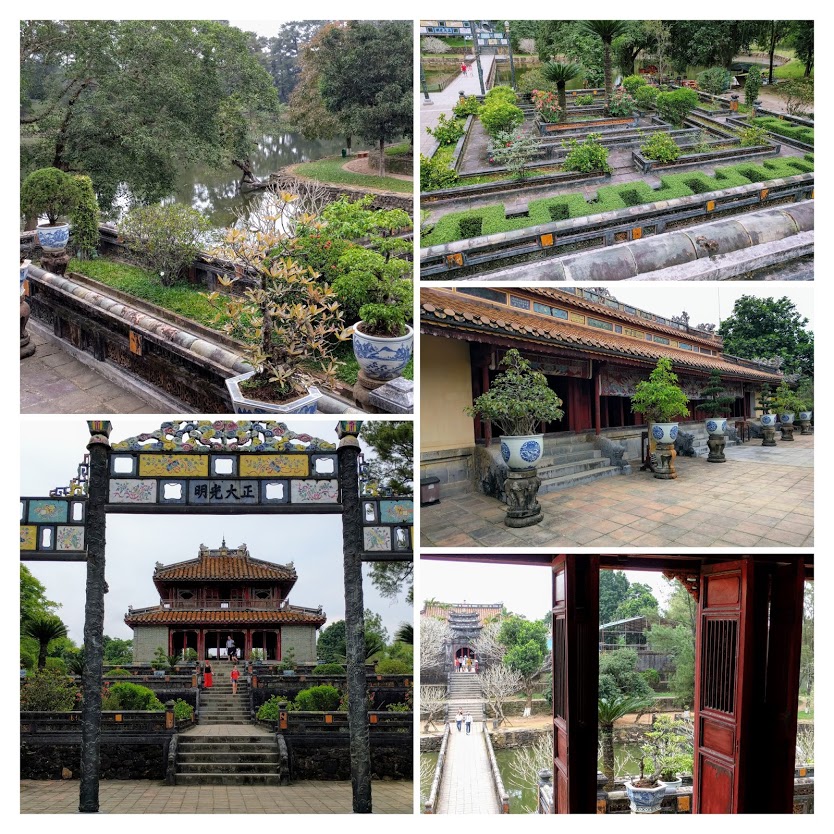 The Tomb was started by Minh Mang in 1840 and took two years after his death in 1841 to complete.  Certainly, the setting was superb. Walled grounds filled with fish ponds and lakes, stone bridges, gardens and a total of 40 buildings, all surrounded by beautiful trees.

The setting beckons you to sit on a bench and reflect on the splendor – or is it excess? – of those times.  The Vietnamese Government and UNESCO work together to preserve this and other monuments in and around the historic City of Hue, giving visitors an opportunity to learn about life during the Nguyen Dynasty.

Our sightseeing morning ended at the historic Thien Mu Pagoda located on the banks of the Perfume River.  This complex is a working monastery and we saw monks – young and old – going about their daily chores.

Some of our (older!) readers may remember seeing – or hearing about – a monk from Hue who, in 1963 was driven to Saigon, sat in the lotus position on a pavement and set himself on fire in protest over the treatment of Buddhists by the Diem regime.  The car that drove him to Saigon is on display at the Thien Mu Pagoda complex. 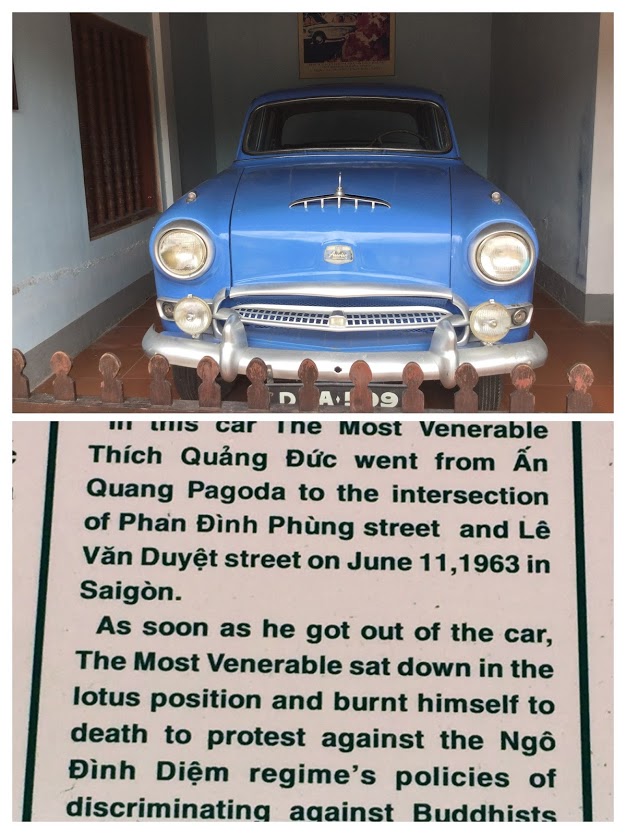 On a happier note, what we loved about this site was the beautiful view of the Perfume River and, in particular, the spectacular display of bonsais in the courtyard behind the Pagoda.  Simply amazing! 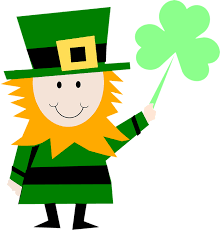 Hue is a great walking town and, when we weren’t sightseeing, we spent time exploring the side streets, taking photos, stopping for a coffee, a cold beer or a meal and watching the world go by – literally!  Our hotel was located in the middle of a busy tourist area teeming with foreigners – mostly young backpackers – from all over the world.  Hostels, guesthouses, restaurants and bars abound. This part of town never sleeps! 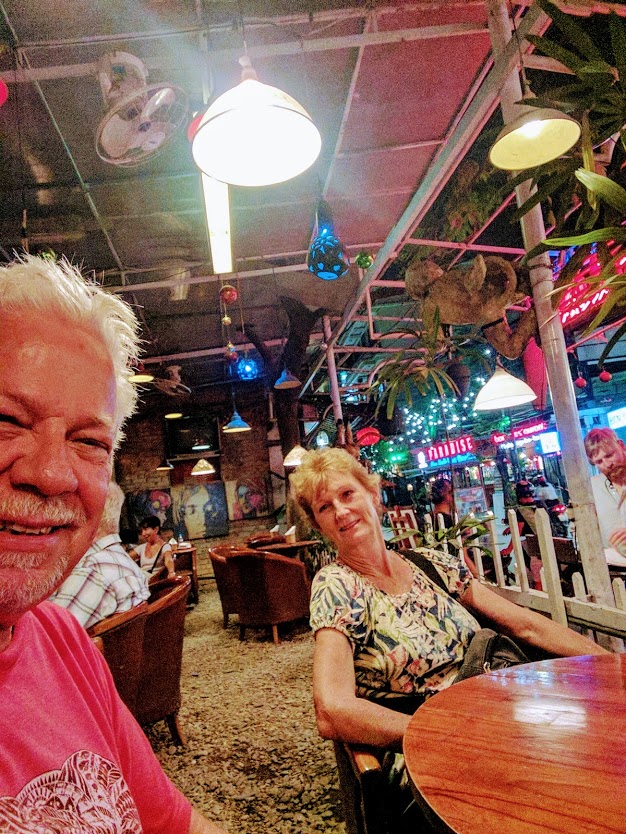 Suddenly it dawned on us — it was St. Patrick’s Day and we had no plans to celebrate! Figuring it would not be an important day in Vietnam, anyway, we went to a nearby restaurant for a “Pizza Special” dinner and started to head back to the hotel.

We were soon caught up in a group of young people celebrating in a major way!  And not just Americans. There were Vietnamese, Europeans and Australians, to name a few!  Any excuse for a party! After a while, it looked as if the celebrations would continue long into the night so, we took a few photos, said our farewells, and left.  Never in our wildest dreams would we have expected to be celebrating St. Patrick’s Day in Vietnam! 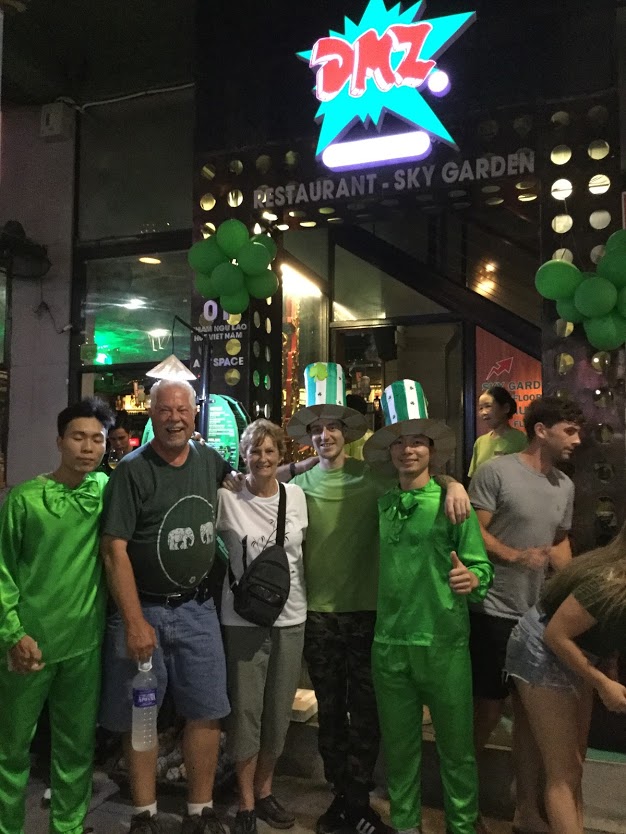 Tomorrow we’ll spend much of the day exploring the crown jewel of Hue – the Citadel Complex -encompassing the emperor’s residence, temples and palaces as well as administrative buildings.

Put your walking shoes on