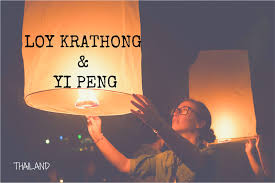 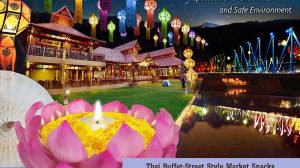 Once again we are in the right place at that the right time … Chiang Mai, Thailand, on Monday November 14, 2016!  How does this keep happening to us?  Maybe it’s because we can then share our experiences – such as the Festivals of Thailand – with those who have never visited Southeast Asia as well as those who have, but missed these special events.

On the night of the full moon, the Festivals of Loi Krathong and Yi Peng took place in Chiang Mai as well as other parts of Southeast Asia.  And what an amazing display it was.  It was also the night of the Supermoon, when the moon was the brightest, largest and closest to earth since January, 26 1948!

We started the afternoon/evening by meeting a friend at a restaurant called The Dukes  located on the banks of the Ping River.  There are four locations in Chiang Mai and all are known for superb western style food – and large portions, so come hungry! 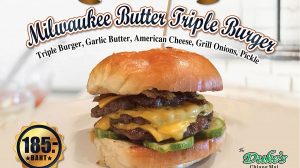 However much one loves Thai food – and believe us, we do – after a while you just need to have a Burger and Fries, a Steak or Fish and Chips!

As the light faded we walked outside along the river.  Already crowds were beginning to gather.  People of every nationality.  Families with young children – back packers – and, of course, older people like us thronged the sidewalk, leaning over the wall to enjoy and photograph the spectacle! 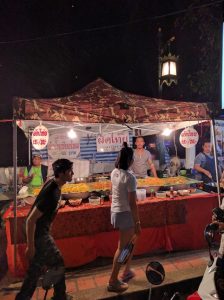 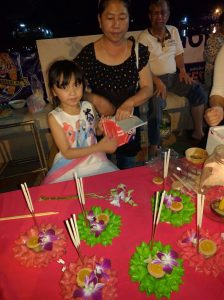 The street venders were already set up and selling freshly cooked food.  Others were making the little boats that you could buy for 20 baht (57 US cents) and float down the river as part of the Festival of Lights.

How did these two Festivals originate?  Here’s what we found out.

According to Wikipedia, Loi Krathong can be translated as “to float a basket”. Thais make elaborate small “boats” from plant stalks such as Bananas, fill them with flowers, incense sticks, a candle and various offerings, including money, and float them on the rivers, ponds and canals. 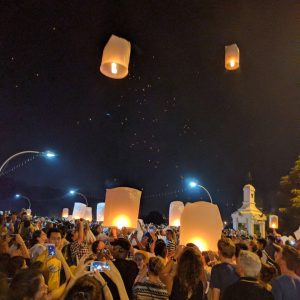 The smell of incense fills the air as the boats float slowly past. As people launch their krathong, bad fortune is released as it floats away.  It’s thought that this festival possibly originated from an ancient ritual which paid respect to the water spirits.

Loi Krathong is observed throughout Thailand but Chiang Mai is known for particularly beautiful celebrations.  The festivities usually take place over a three day period.

Loi Krathong coincides with the Northern Thai Festival of Yi Peng which takes place on the day of the full moon in the second month of the Lanna lunar calendar.  This is actually the twelfth month of the Thai lunar calendar.  Beautiful floating lanterns, usually made of rice paper stretched over a bamboo frame have a tray with a candle or cotton soaked in kerosene attached.

When lit, the heat is trapped inside and causes the lantern to be launched into the night sky.  Prayers are said before launching and it is believed that bad luck will disappear into the sky with the lantern, particularly if it disappears from sight before burning up.

Due to the King’s recent death, no fireworks or loud music were allowed so we experienced a quieter but still mesmerizing Festival of Lights.

For those who are interested, Chiang Mai Best has some great information on the two Festivals.

So, we are now 543 years and 12 hours ahead of Eastern Standard Time!

We have had the privilege of being selected as Ambassadors to join Japanese, Korean and Chinese residents for a four day tour of Northern Thailand.  The tour is sponsored by the Provincial Governments and the purpose is for us to experience the different aspects of the region in order to promote long-term and retirement tourism.  Join us on our next adventure!