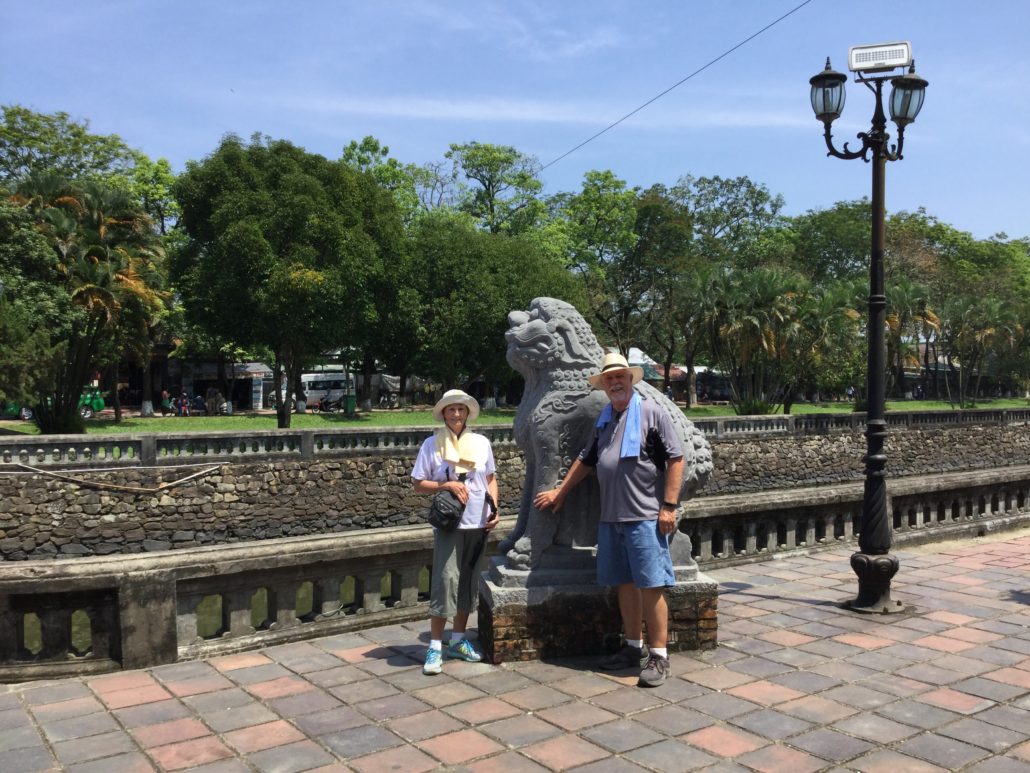 So much has happened since we returned to the U.S. in April.  Catching up on doctor and dentist appointments, reconnecting with family and a month long road trip to Michigan to spend time with Bill’s brothers and his 94 year young Mother in Michigan.

Of course, on our way there we made stops to tour the Corvette Museum  in Bowling Green, Kentucky, 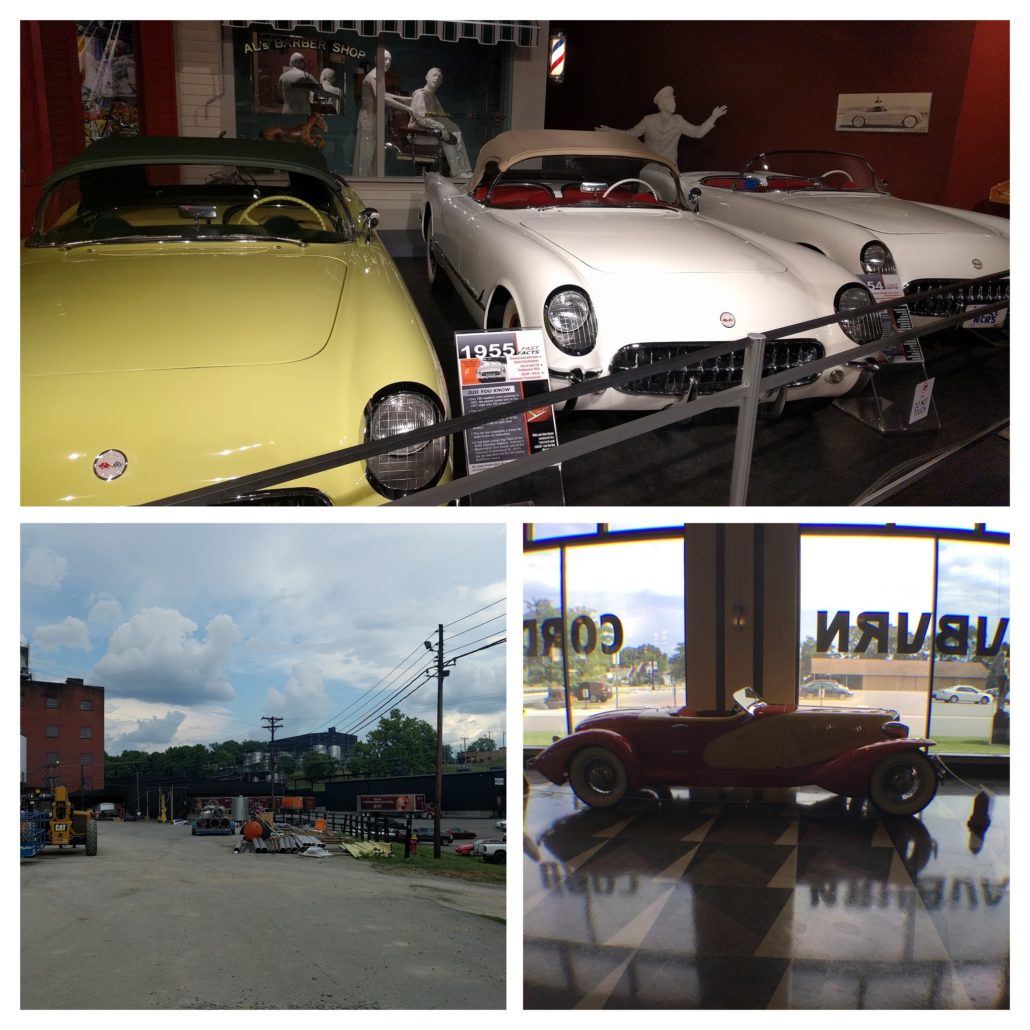 And enjoy (for the second time) seeing 10,000+ street rods drive into the Kentucky Exposition Center in Louisville!

We did sneak in a tour of the Barton Bourbon Distillery in Bardstown.  The sample tasted so good Bill decided he might switch from Scotch so we left with a bottle!  We plan to return to explore this charming town in the not too distant future! 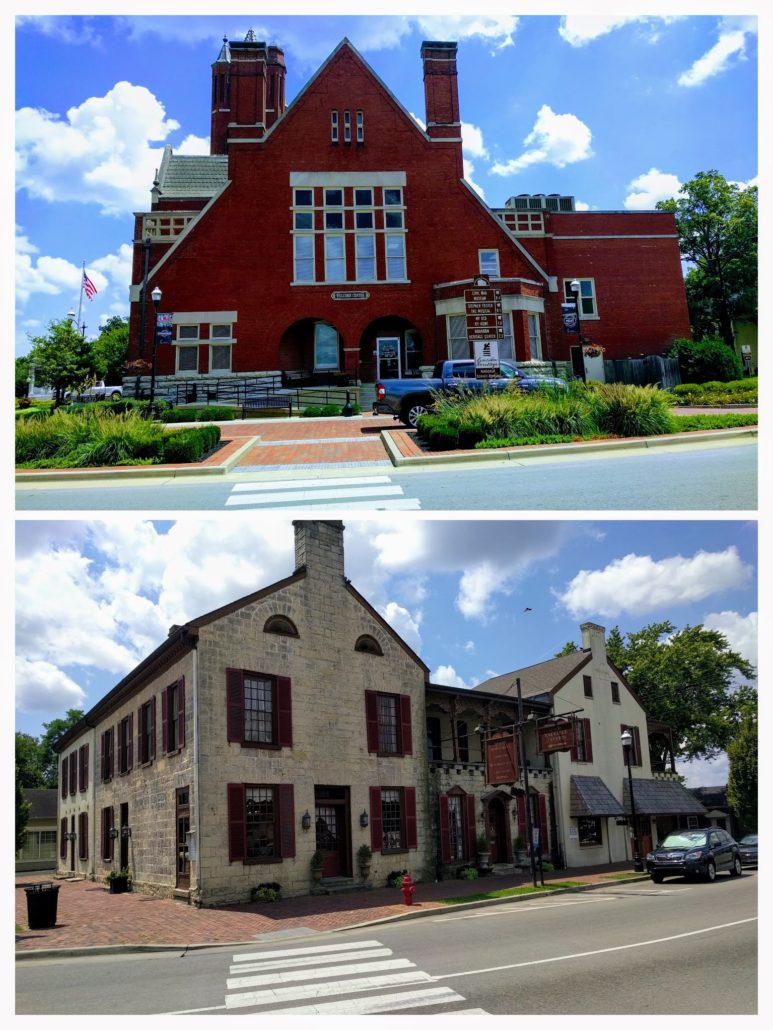 Maybe there was a reason for the delay in finishing our Vietnam story.  The Public Broadcasting Service recently launched The Vietnam War”, a 10-part 18-hour documentary film by Ken Burns and Lynn Novick.  We watched every episode, saw some of the places we’d visited – like the city of Hue – the site of one of the longest and bloodiest battles of the war.  We learned a lot from the series, were horrified once again by the violence on both sides and wonder if the human race will ever learn the lessons of history.  We hope so.

And now … back to our visit to the Hue Citadel in March. 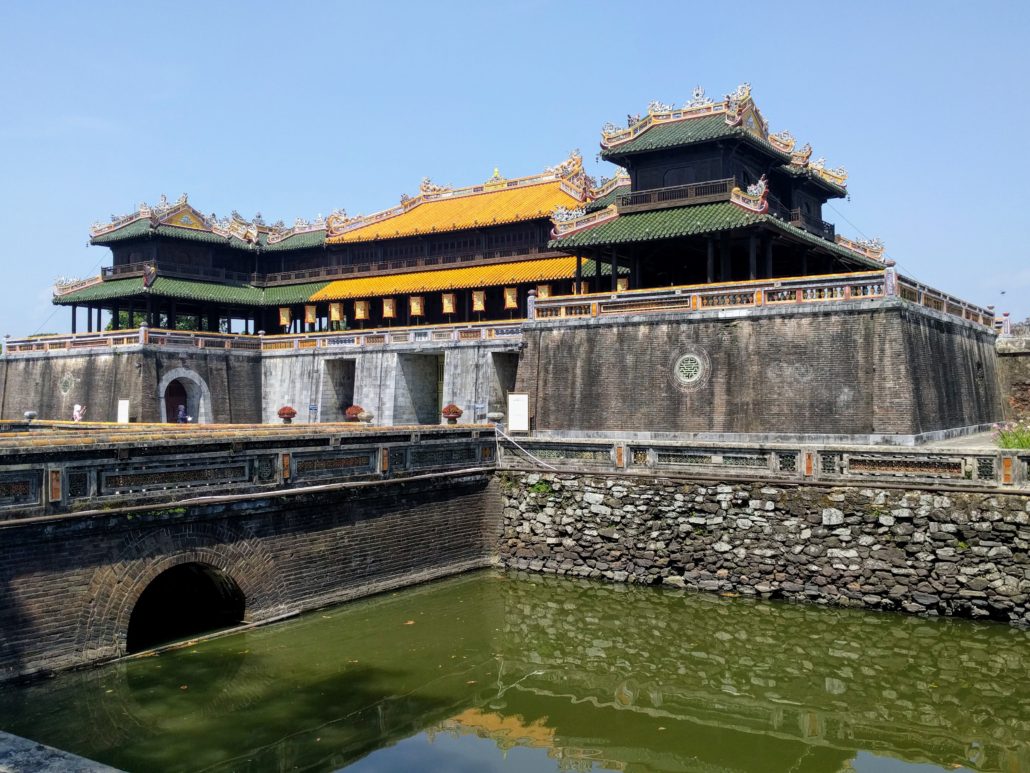 Our visit to Hue would not have been complete without spending time at the Citadel.  Standing guard over the city of Hue, the Citadel is a rather grim fort-like structure topped with a massive flag pole displaying the huge red and gold flag of Vietnam.  It was from here that the last of the Nguyen Emperors “ruled” during the 19th and 20th Centuries (under the very watchful eye of their French colonizers who conquered Vietnam in the late 19th Century). 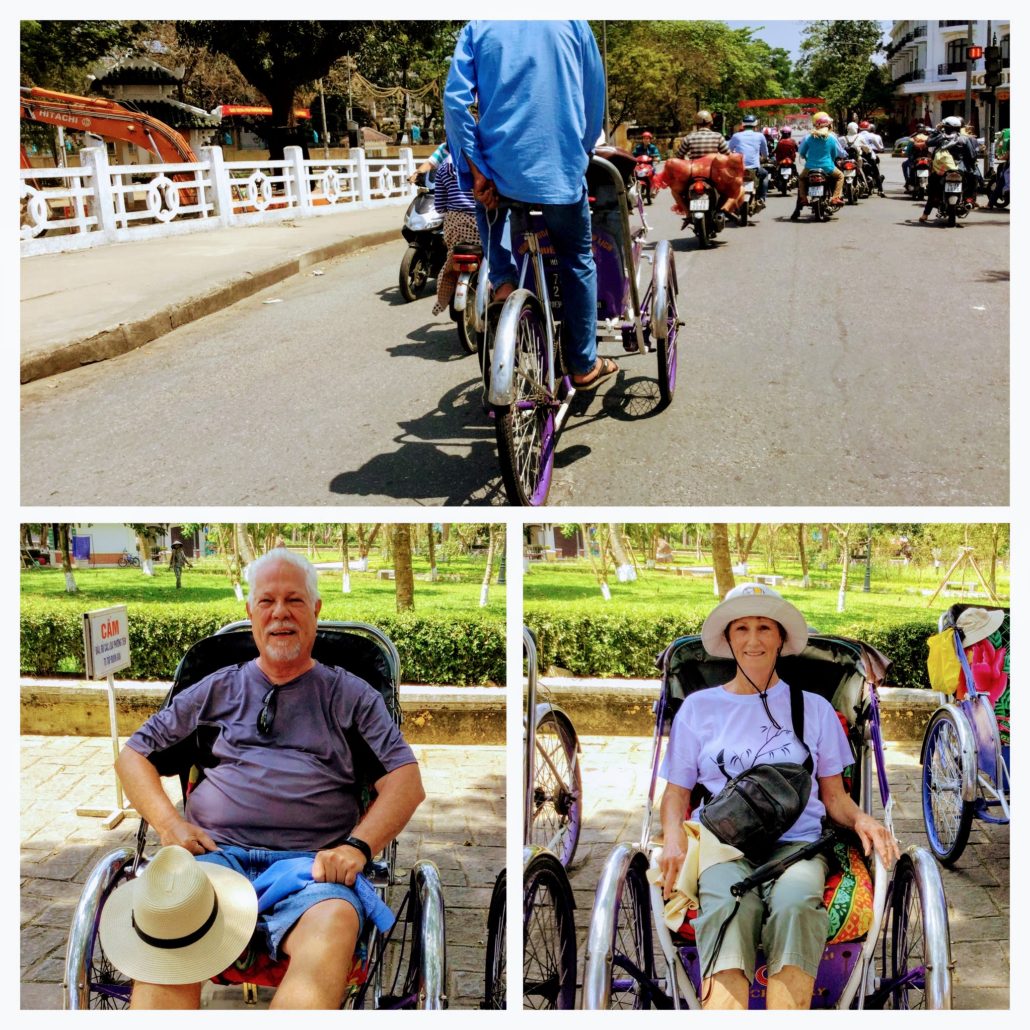 We decided to take a cyclo on the short ride from our guest house to the Citadel.  On arrival we showed our entrance tickets and asked for a brochure but the ticket-taker merely shrugged and shook his head. Turns out there are none!

There are a few Informational signs in front of some structures which are helpful but those who are truly interested in the history of this complex must do their own research or, better still, hire a guide through a travel agency like VM Travel.

Our first impression was that this complex must be very old, however, we were wrong.  Wars and a fire in the late 1940’s have left their mark but it was the 1968 Tet Offensive when the US Military fought to push the North Vietnamese army back to Hanoi that most of the buildings were destroyed. 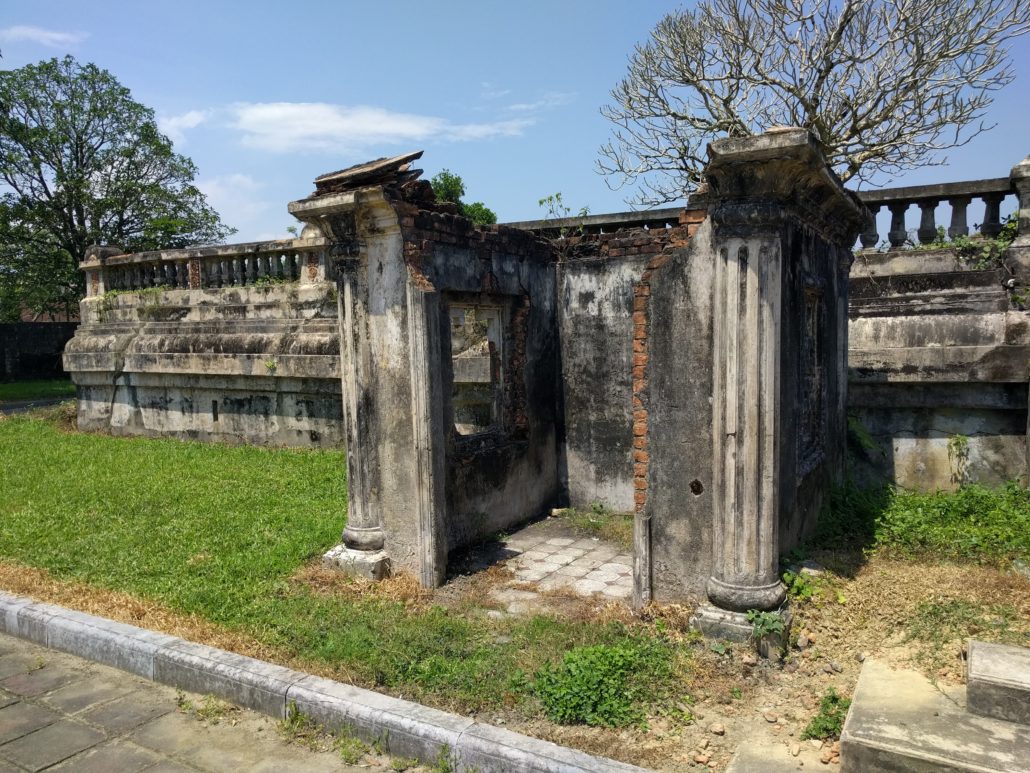 Restoration projects, funded by the Vietnamese Government and several other countries, have been underway since 1992 when the Citadel was listed as a World Heritage site.   We saw some of this restoration taking place but much of the complex is a ruin and the question is:  how far should they go in returning it to its original state?  The ruins are a key part of its history which some feel should be accepted and not radically changed.

We spent over two hours walking around the grounds and through the various buildings, stopping along the way, trying to imagine what the entire palace complex had looked like during the peak of the Nguyen dynasty.

Among the buildings still standing is the Throne Palace, also known as the Palace of Supreme Harmony. This was where ceremonies, such as coronations, were held and foreign dignitaries were received by the Emperor.

We were interested to learn that the Throne Palace remained cool in the summer and warm in the winter and the acoustics were such that if you stand at the center of the Palace (where the Emperor’s throne was placed) you can hear sounds from any point in the palace. 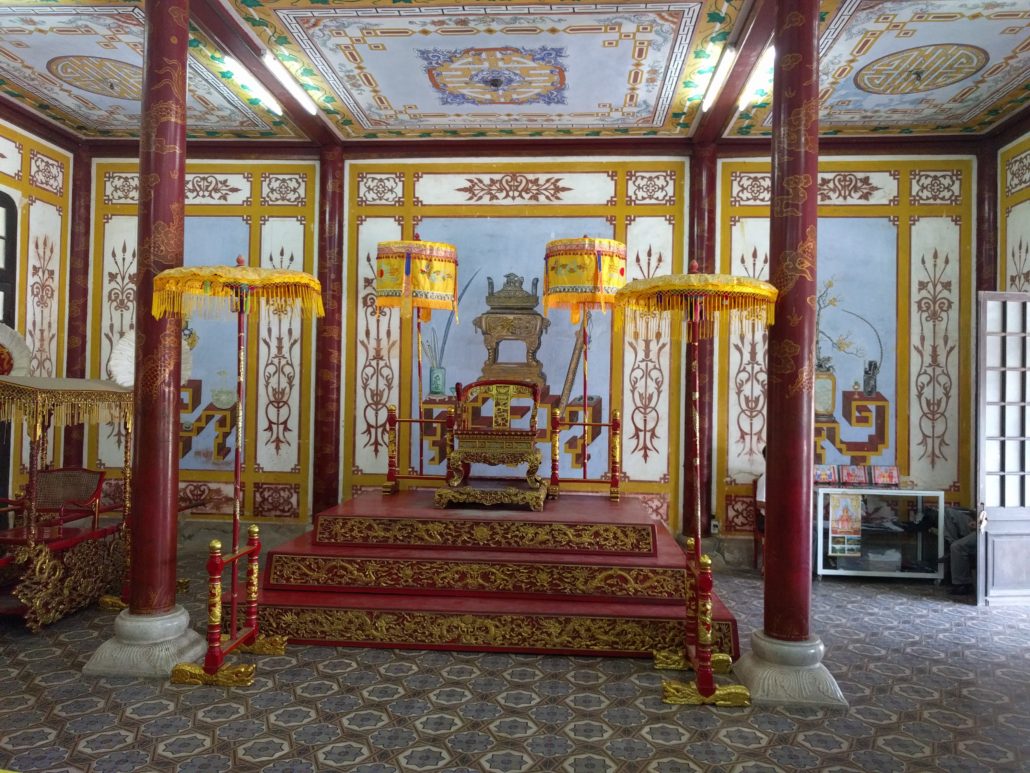 Behind the Throne Palace is a plaza bordered by two Mandarin’s Buildings which housed administrative offices and where national examinations were held for those students wishing to obtain a position in the Imperial Civil Service.  These buildings have been beautifully restored and we sat for a while before continuing our tour.

During our exploration of the grounds we came across, of all things, a restored tennis court installed by the last Emperor, Bao Dai.  For a moment we felt we were in suburban USA!

One of our favorite buildings was the Royal Reading Room, a peaceful building surrounded by a pond, rock garden, galleries, bridges and artificial lakes. Emperors would come here to write letters and read books.  It was one building that somehow managed to avoid demolition by both the French and the Americans. 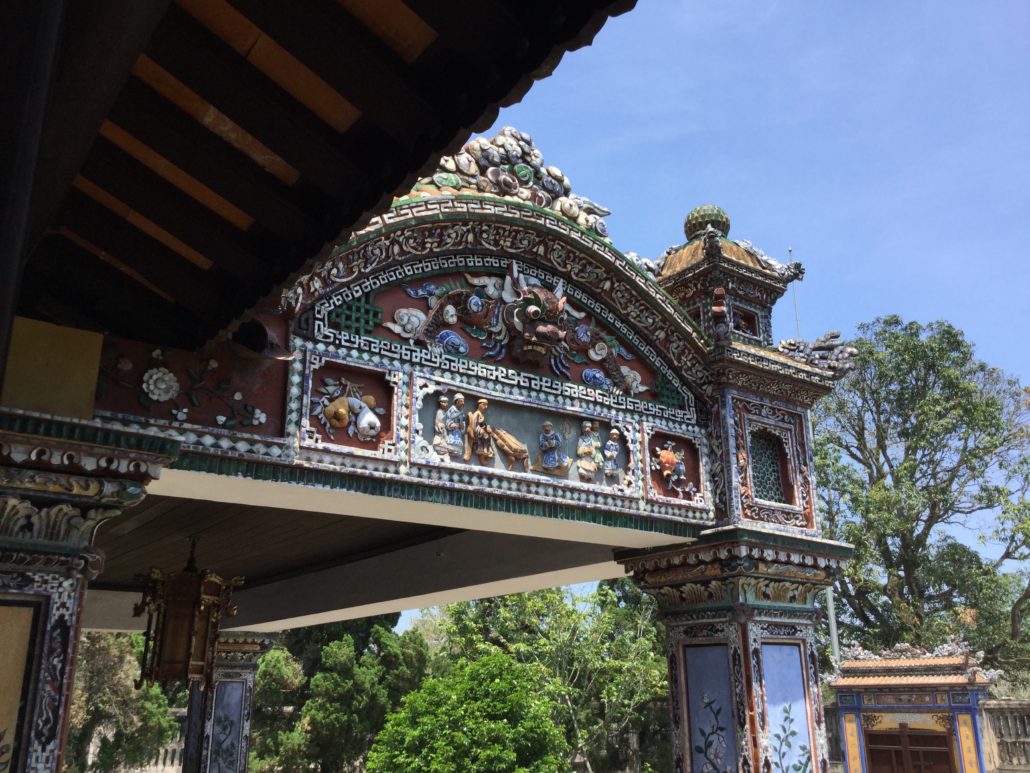 Ornate gates led us into and out of compounds with pavilions and palaces – some restored and some left in their natural state – that honor the Nguyen Emperors as well as the lives of important commoners who assisted in ruling the empire.  One cannot but wonder what stories of intrigue and infighting the walls could tell … if only they could talk!

Our cyclo drivers were waiting for us – as promised – and we headed back to the Leloi area for lunch.  As expected we had to spend quite some time negotiating the price of the trip before the drivers realized we were not going to be brow-beaten into paying more than the trip was worth!  In the end, it was a win/win situation!

Before leaving by plane for Hanoi, the last stop on our journey, we experienced two unforgettable events.

First of all, we were invited to join Vinh and his team of English speaking drivers at a restaurant for dinner.  Of course, we would never have found this restaurant on our own!  We sat at a table on the patio and enjoyed a wide ranging conversation while trying to keep up with the array of delicious food that kept on appearing!  One of our waitresses realized that Priscilla was a little warm and brought an electric fan out to cool her!  That’s the kind of service you get in this part of the world! 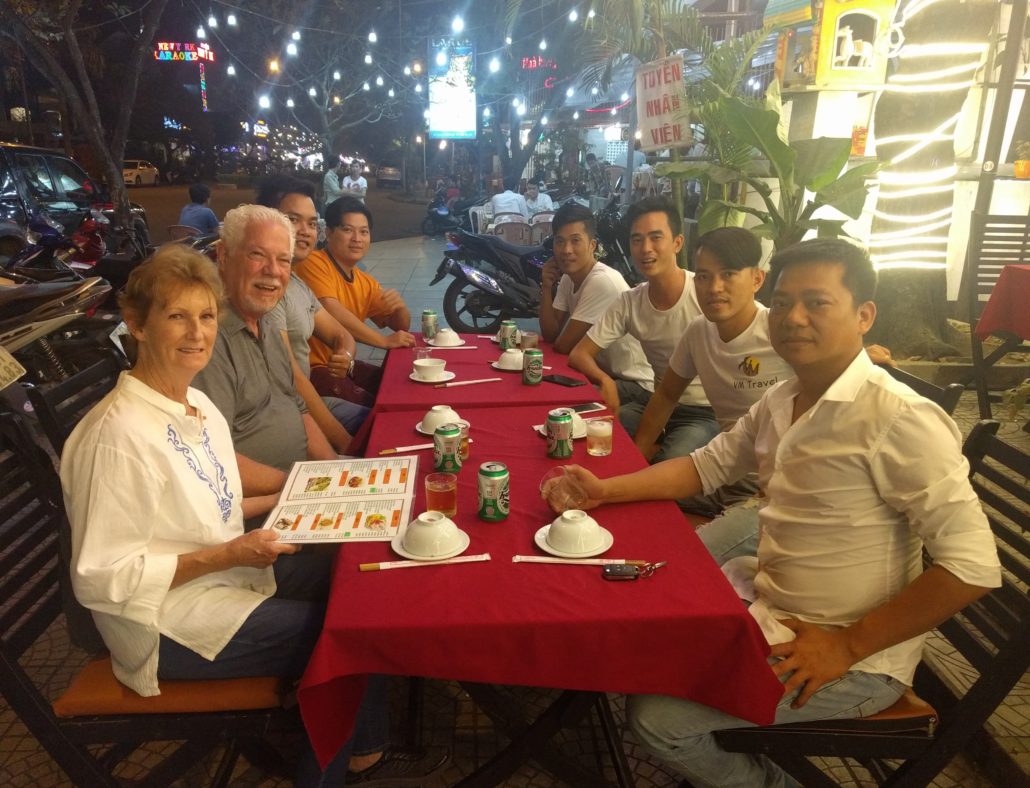 We were also thrilled to be invited by Vinh to have dinner at his home.  He and his family live in the country about 15 km from the city. We enjoyed a beautiful sunset as we drove there through the ‘suburbs’, and then rice fields as far as the eye could see.

Vihn’s mother and wife had prepared a delicious meal of spring rolls, soup, pork, fish and rice.   We were able to relax and appreciate this very special experience. Their beautiful 4 year old daughter was too shy to talk to us but we did get a smile out of her!  We could not have envisioned a more special ending to our visit to Hue!

And now  … come fly with us to Hanoi, the capital of the Republic of Vietnam.

We are booked into an Airbnb in the chaotic Old Quarter … a place filled with motorbike drivers honking their horns, sidewalks filled with people selling something or sitting chatting with their friends over a cup of coffee or green tea.  It’s an experience unlike any other …. We promise you!

Previous Post Dynasties and Leprechauns in the City of Hue, Vietnam Next Post North Vietnam – The End of Our Journey