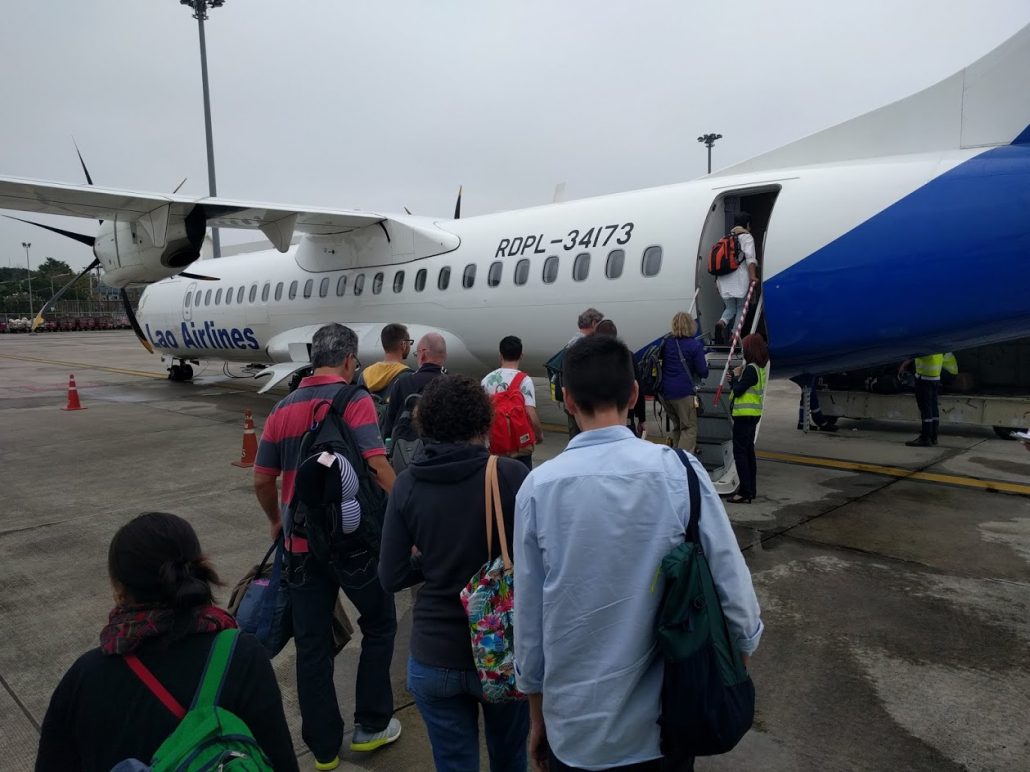 Saying goodbye to our friends in Chiang Mai on January 1st, we boarded our plane for Luang Prabang, Laos, the next stop in our Southeast Asia journey.  Our flight took us over heavily forested mountainous terrain and we landed at a small airport that reminded us of Orlando Airport in the “old” days when we walked across the tarmac to the terminal! Visa and Immigration formalities took a while but went smoothly and we left there with a 30 day visa at a cost of USD $35 each.  You are required to pay in US dollars and change is given in US dollars.

A shared taxi ride into town took about 15 minutes, dropping people off at different hotels or guesthouses.  Although it was almost dark by the time we were settled in our guesthouse on the Mekong River, we set out to explore the surrounding area and find a restaurant for dinner.  The streets were almost deserted and we walked in the middle of the road without fear of being run over!  It was quite an eerie feeling after the hustle and bustle of Chiang Mai!  We later found out that the town closes down completely by 11:00pm!

Visiting a new country means that we have to get used to some changes and here are a few quick points about Laos:

Laos is a landlocked country bordered by Thailand in the west and southwest, Myanmar (Burma) and China to the northwest, Vietnam to the East and Cambodia to the southwest.

The country is officially known as Lao People’s Democratic Republic (PDR) and, since 1975 has been a One Party Socialist Republic, governed by a Communist Politburo controlled by Military Generals.  The Hammer and Sickle flag flies alongside the Laos flag. 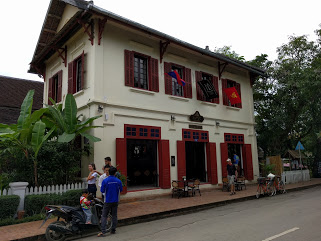 Laos was a French protectorate from 1893 -1953 and much of the French influence is evident today throughout the country.

Unlike Thailand, they drive on the right hand side of the road so we had to get used to looking the other way before crossing the road! 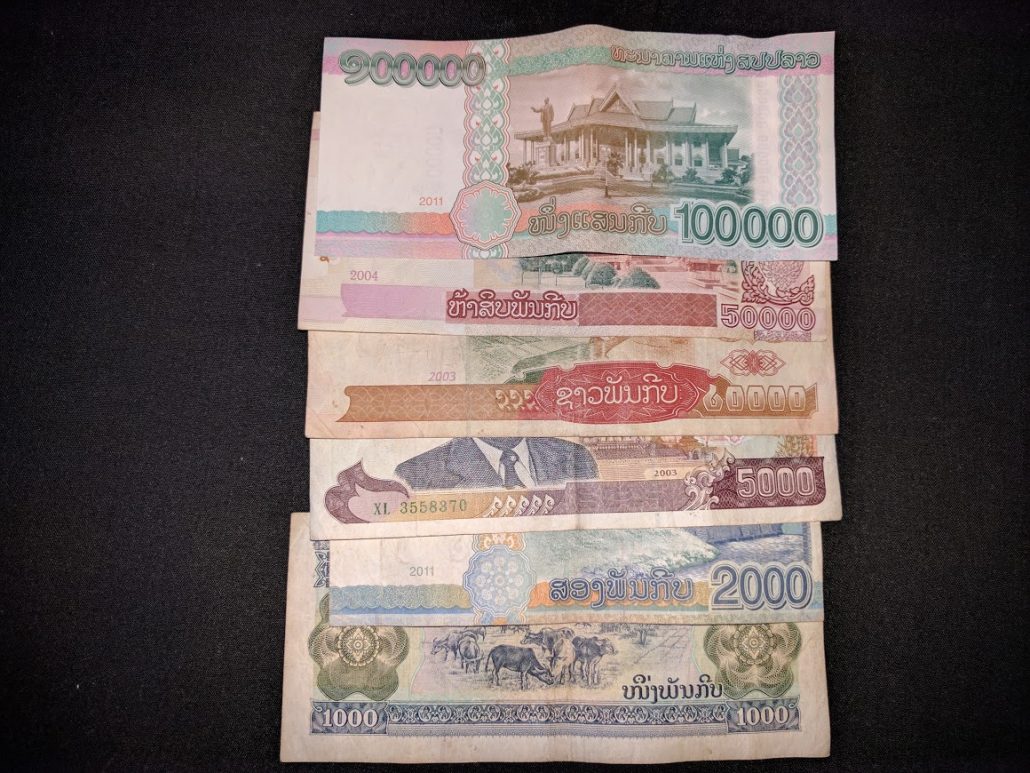 Laos played a role in the Vietnam War and according to Wikipedia “Between 1964 and 1973, the U.S. dropped two million tons of bombs on Laos, nearly equal to the 2.1 million tons of bombs the U.S. dropped on Europe and Asia during all of World War II, making Laos the most heavily bombed country in history relative to the size of its population”.  Vast areas of the country are impossible to cultivate due to unexploded bombs which continue to cause death and injury to people.

Luang Prabang is known as one of the best-preserved towns in Southeast Asia and was awarded the UNESCO World Heritage status in 1995. The architecture is a combination of traditional Lao Teak houses and French colonial mansions, many of which show the effects of time.

The town is situated in a valley at the confluence of the Mekong and Nam Khan rivers and attracts backpackers and outdoor enthusiasts with its wide variety of activities, as well as those interested in textiles and architecture.  The French influence is obvious and the vast majority of the visitors we came across were from Europe, particularly France.  We also met a lot of Australians, as we did in Thailand.

One of the first things we noticed was that more Lao people speak English than the Thais in Chiang Mai.  Also, many of the restaurants offer delicious French style breads and bakeries and even Lao restaurants serve Western type dishes.

The prices are quite a bit higher than in Chiang Mai where we ate lunch for the two of us for around $3! Here breakfast can cost around $10 for two – that’s with a large, delicious up of cappuccino!  However, the Night Market food prices are on a par with Chiang Mai. 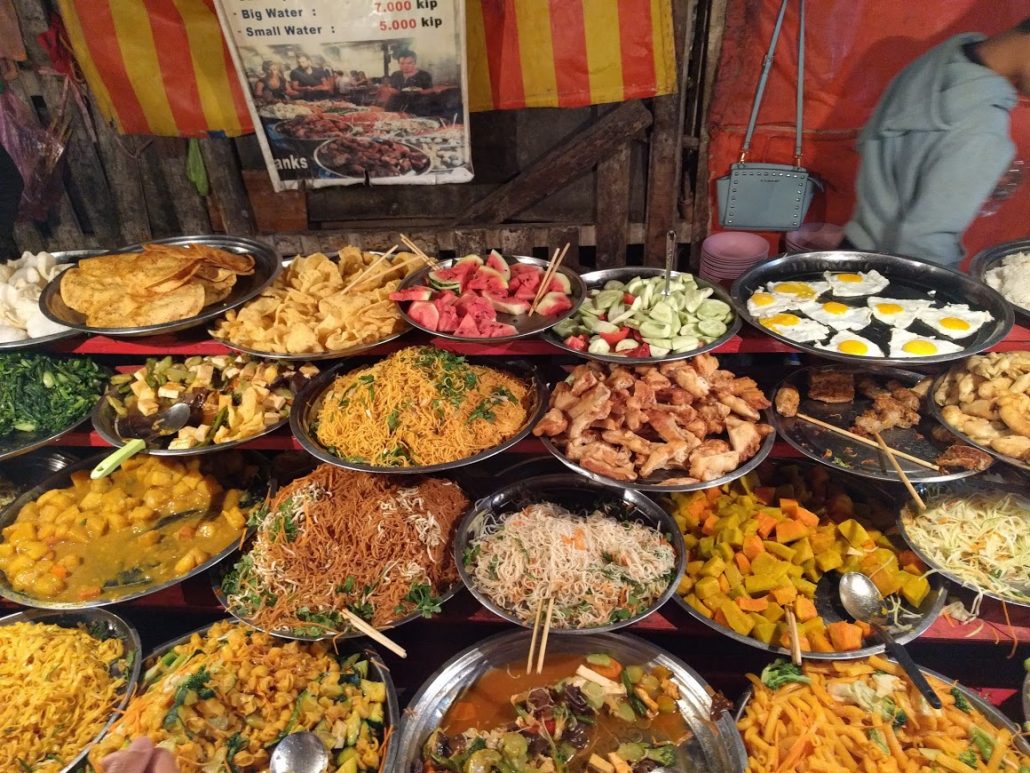 Luang Prabang is, without doubt, the premier tourist destination in Laos and has the reputation of being the heart of Lao culture and religion.  All this adds up to inflated prices apparently unknown in other parts of Laos – we’ll see if this is true as we travel south. The normal stay for tourists is 2.8 nights.

We initially booked a guesthouse online for two nights but were not pleased with it.  So, on our first day we familiarized ourselves with the layout of the town while checking several guest houses, ranging in price from $12 a night (recommended by a young Canadian couple) to $25 per night which had the bed against the wall so one of us would have to climb in! 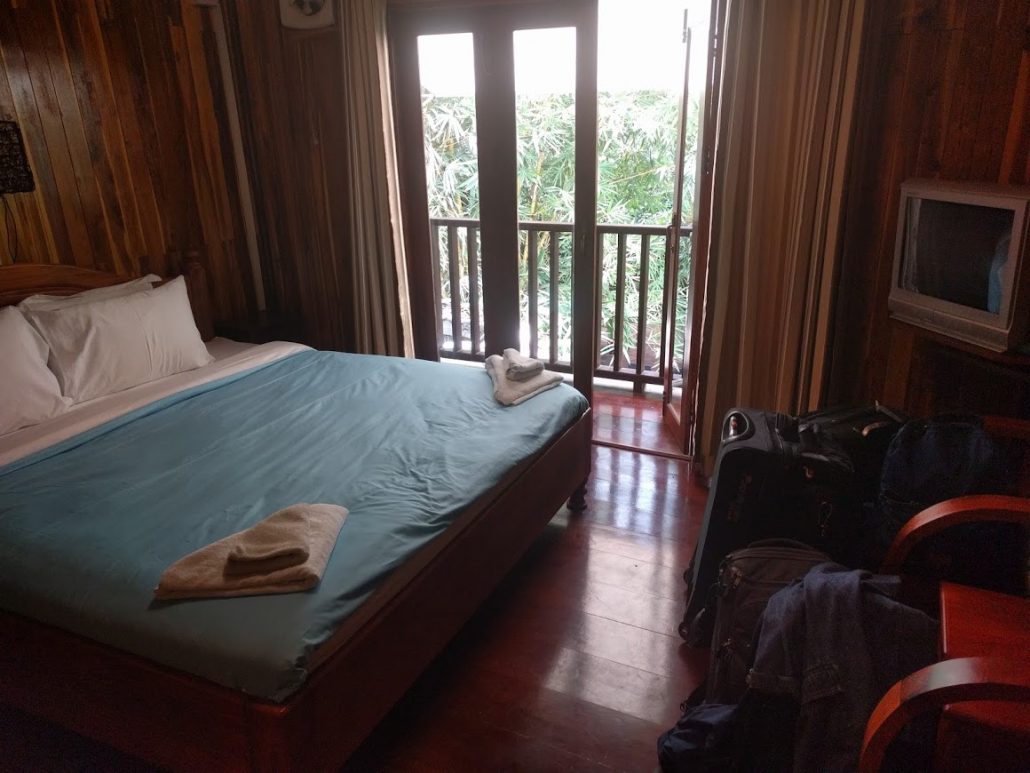 We soon found a very nice place for $30 per night.  Remember, in Chiang Mai we were paying $14 a night!  The house is an attractive traditional Lao style house made of teak.  Our room was large with a very comfortable King bed and a modern bathroom. We booked for a week.  One problem was that there was no closet to hang our clothes.  We assume backpackers don’t need to hang anything up!  And the other was weak WiFi. However, the staff was friendly and the location was perfect.

We left Chiang Mai in the rain and the cloudy, cool, wet weather followed us to Luang Prabang.  In fact, we only had 1 day of sunshine during our stay which is most unusual for this time of year.  This did not deter us from the sightseeing we had planned to do and we were soon in the laid back mood of the country where PDR is known as Please Don’t Rush!

We’ll catch you up on our sightseeing in our next blog.