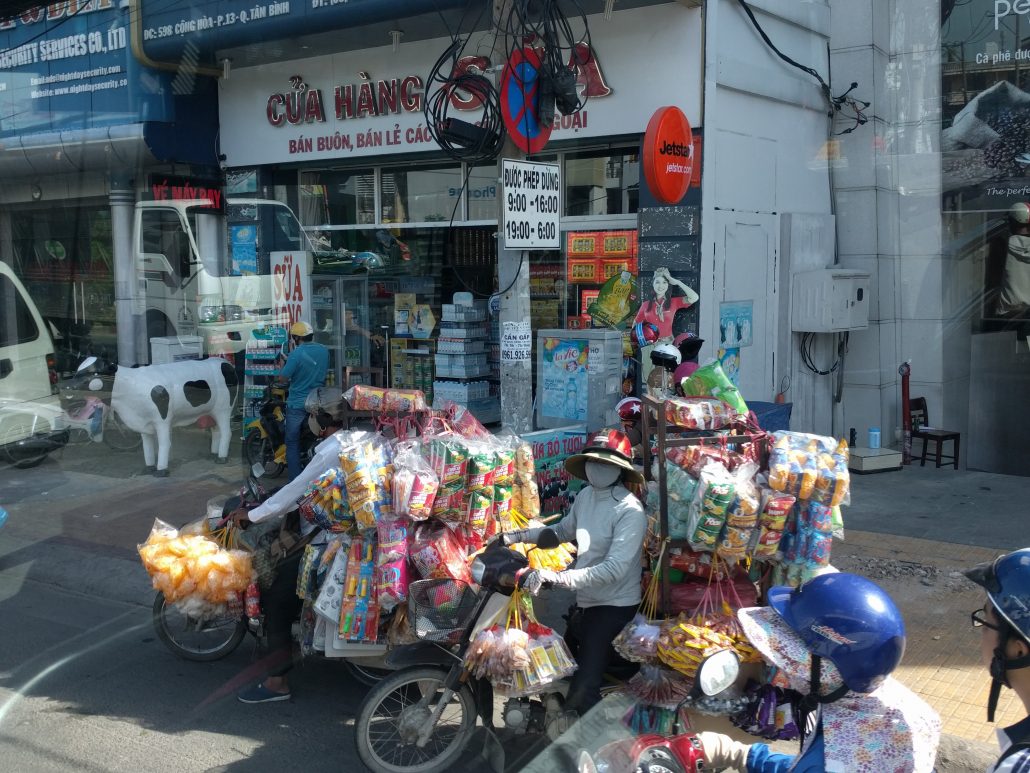 We hit the jackpot! Our time in Ho Chi Minh City turned out to be even more than what we were hoping for when we booked an Airbnb property.  To be honest, it doesn’t always work out that way, as we were to find out later on.

We did, up to a point, do some of the sightseeing that ‘normal’ tourists do but much of our time was spent becoming part of a close knit community, getting to know our neighbors and learning about life off the main streets of the city.   And what fun we had!

At first, as we walked through the alleys to and from our new home, we were met with curious glances.  But after a few days, as we greeted everyone we saw, we started getting smiles and even a few “Hello’s”!  Soon some people wanted to speak English and started conversations by asking us where we were from.  Slowly the bonds were formed. 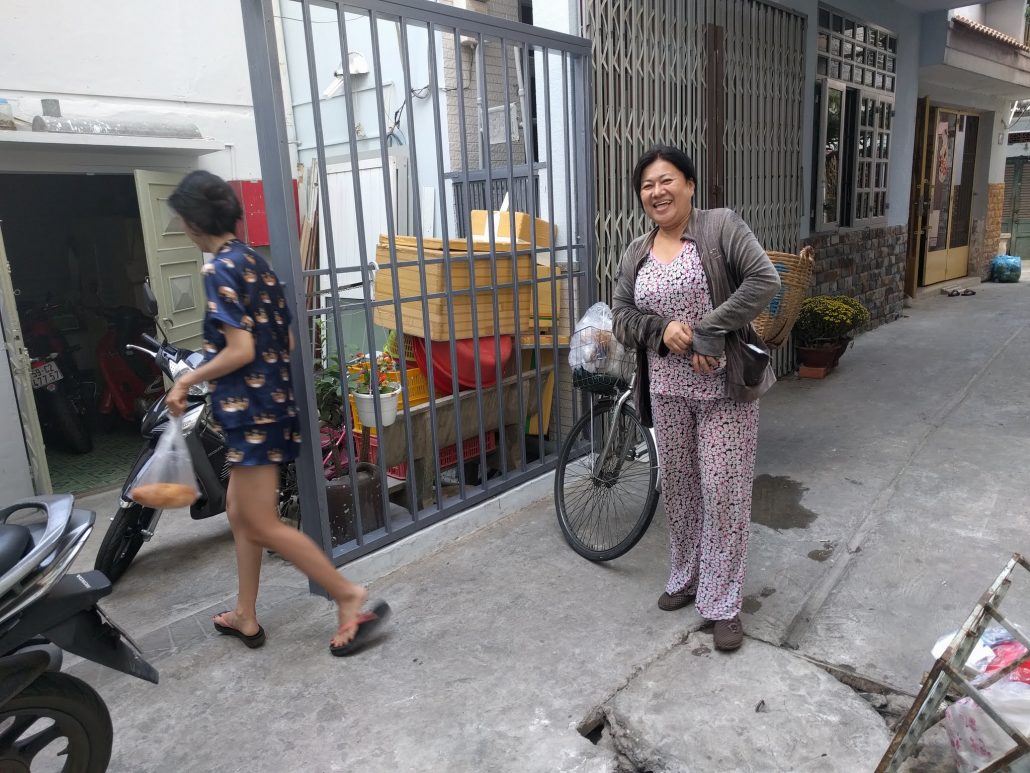 In the photo above you’ll notice a metal hook inserted into a section of the alley.  These are common throughout the alleys and, we assume provide a way to access the drainage system below.  The reason Priscilla is wearing dark glasses in some of the photos is because she tripped over one of these hooks resulting in a black eye and facial bruising.  Nothing too serious but not very attractive to look at!

Our hostess had planned a trip to Macau for a week and asked if we would like to stay and take care of her house during that time.  Well – it didn’t take us a blink of an eye to say “Yes”!  And so we became neighbors and friends with people most tourists never meet. 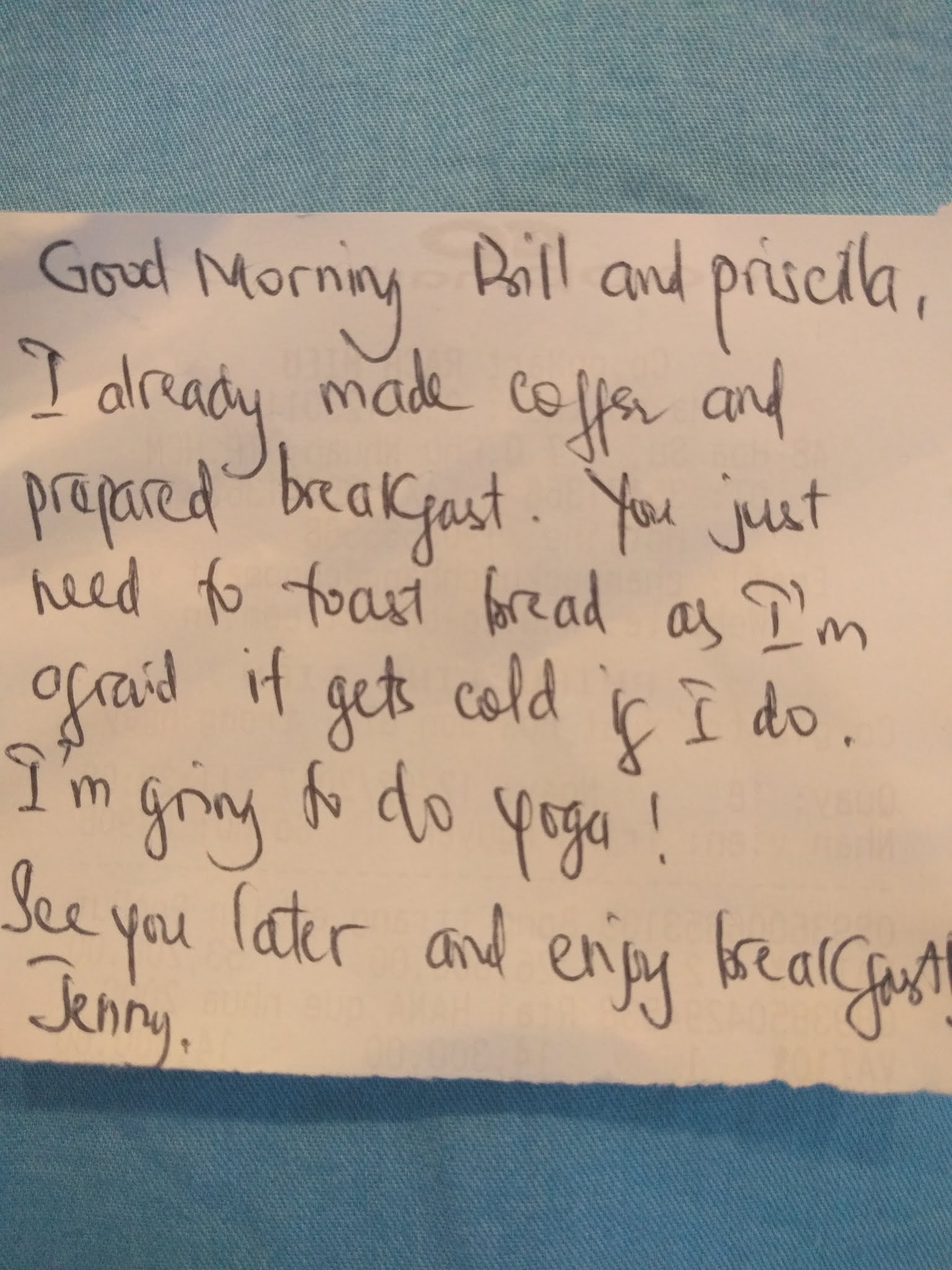 Our neighbor directly across from us has a catering business and every now and then we’d see lots of activity there – people helping to prepare and cook large pots of soup and other dishes.  She didn’t speak any English although her daughter spoke a little so we were able to connect.

We were keen to visit the market where she bought her food and she agreed to take us there one morning at 8:00am.  We followed her down our alley for a short distance and then we were lost!  Turning this way and that we came across a very small, local market where everyone greeted our neighbor like an old friend!

She obviously had her favorite vendors because when we pointed at something we wanted to buy she would shake her head and move on to another stall and get it there.  She negotiated the price, took the money out of our hands to pay, and carried the bags home for us, all while Bill was busy taking photos!  We didn’t keep track of how much we spent but it was way less than $10 for lots of food!  It was an experience we’ll never forget!

Before we left, our neighbor brought us a large bowl of delicious crab soup that she was making for an event.  We returned the favor just before we left by giving her a plate of devilled eggs – something we felt she would enjoy but not be familiar with.

Almost every day we would hear the voice of the “Bread Lady” who wheeled her bicycle down the alley.  The basket was filled with freshly baked baguettes, still warm to the touch.  We looked forward to the sound of her voice!

Vietnam is known for manufacturing many different items for export around the world and Bill happened to mention to our Hostess’ friend that we would like to visit a Factory. No problem … he had a friend who knew someone who … well you know about the Six Degrees of Separation!

So within a couple of days we set off to the Phuongdong Garment Factory where we were met by the Merchandising Manager.  She escorted us first to the Show Room where shirts, blazers, men’s suits and sports wear were displayed.  These items are exported primarily to the U.S. and the European Union and their customers include Ralph Lauren, Kenneth Cole, TJ Max, JC Penny, Marshalls, Sam’s and Kirkland. 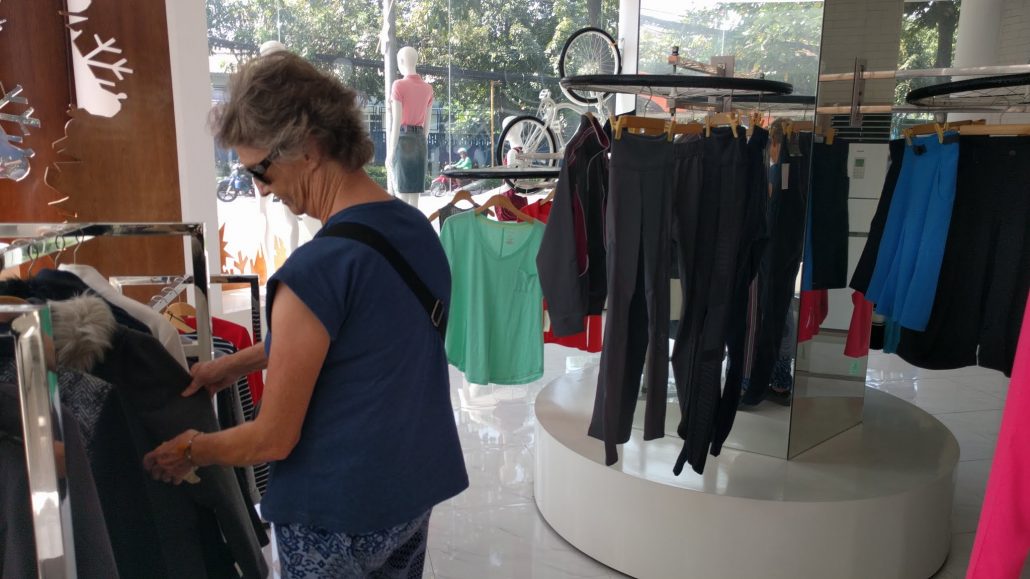 Next we toured two production lines, one where items were stitched and another where the fabric was cut.  Both production areas were well lit and at a comfortable temperature. The employees were focused on their work and barely noticed we were there!  We learned that the employees work from 7am – 5pm with an hour for lunch. A six-day work week is standard throughout Southeast Asia.

The company operates six factories, five of them in the Ho Chi Minh area and continues to seek new markets.  We enjoyed our visit and were impressed with what we saw.  So grateful for the opportunity to experience another aspect of this city.

A Note About the Money

Currently there are 22,753 Vietnamese Dong (VND) to a Dollar which means that a 1,000 VND note is worth 4 cents US!  All purchases are made in cash, particularly for local Vietnamese.  So people walk around with millions of Dong in huge wads of notes!  The newer notes are made of a polymer rather than paper so they are more difficult to counterfeit and last much longer than paper notes.  There are no coins.  Supermarkets and some Restaurants accept credit/debit cards although some also charge a fee so cash is the main form of payment. 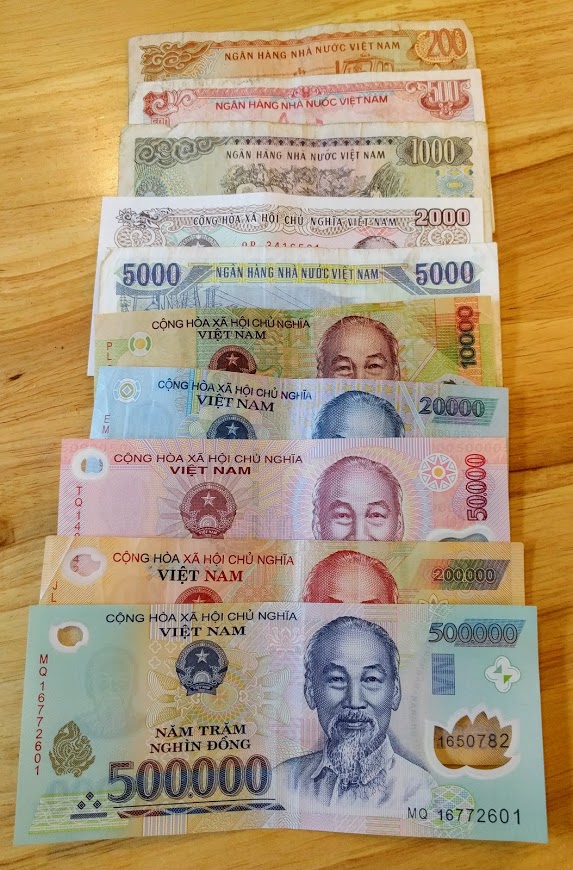 Next Stop Hoi An

The week flew by and our Hostess returned which meant, sadly, that it was time for us to move north to the ancient town of Hoi An.  For this trip we chose to go by train – a 17 hour journey leaving Ho Chi Minh City at 7:30pm and arriving at 12:30pm the next day in Danang where we are to be met and driven the short distance to Hoi An.  We could easily have traveled by air – at around the same cost – but decided to experience a train journey instead.

In preparation for our trip, our Hostess cooked a Farewell Meal consisting of all our favorite dishes – spring rolls, chicken soup with noodles, chicken and sweet potato curry with rice, and – for dessert –  mango and sticky rice. Delicious!   We packed some fruit and snacks for the next day and we were all set. 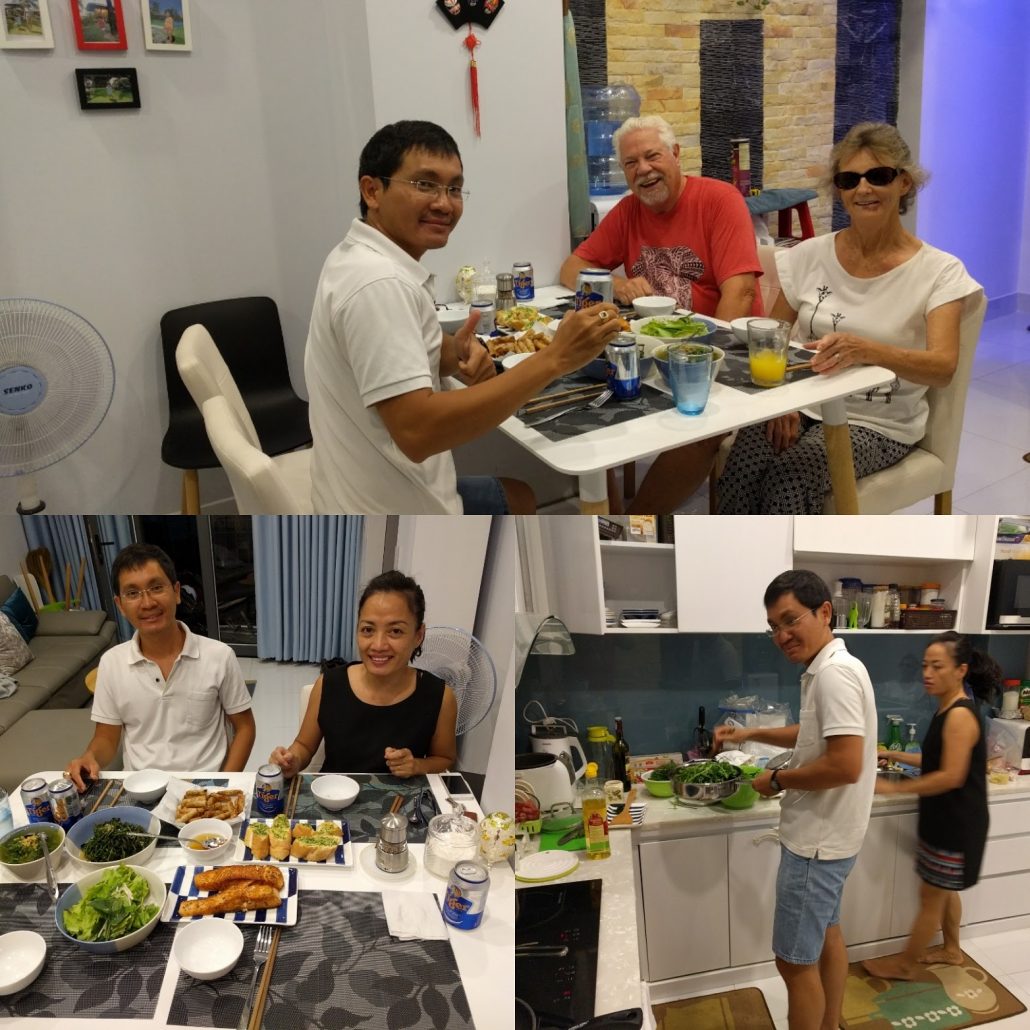 Farewells are never easy and we were truly sorry to leave Ho Chi Minh City and, in particular, our Hostess and the lovely friends we had made in her neighborhood.  But for now, it was a “Grab Car” to the Railway Station on our way to explore the ancient historic city of Hoi An, a major trading port in the 16th and 17th Centuries and today a UNESCO World Heritage Site.