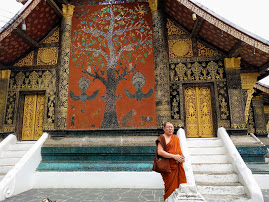 Most of our sightseeing centered around the town of Luang Prabang although we definitely wanted to enjoy time on the Mekong River.  We decided to take a luncheon cruise to the Pak Ou Caves the next day because it was expected to rain for the rest of the week. 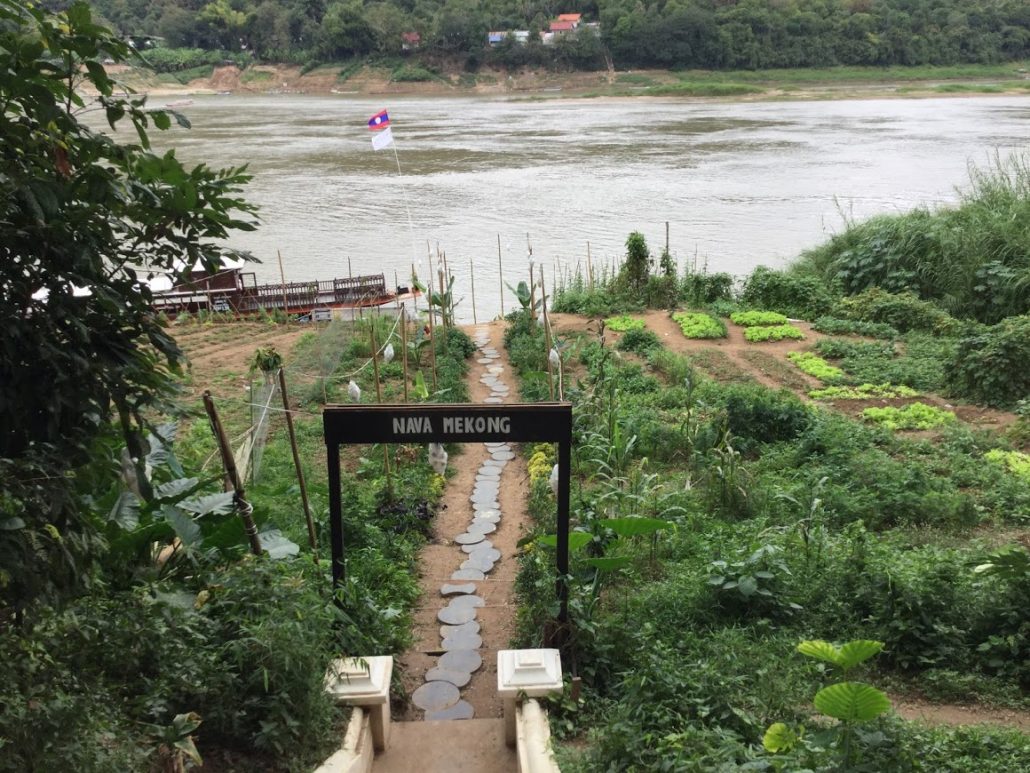 We dressed warmly and were at the boat dock in time for a 10:00am departure.  The cruise we chose was on the Nava Mekong boat  which had good reviews on TripAdvisor.  We were not disappointed.  The staff was very attentive and the Tour Guide, a young Frenchman, spoke excellent English and was very knowledgeable.

We cruised upriver for just over an hour and stopped at “The Whisky Village”!  As the name indicates, local whisky is distilled here and we had a small taste of two different types of whisky.  Both of them tasted like bad Moonshine and we decided to pass on buying a bottle!  We continued on a walk through the village where women were weaving traditional Lao fabrics.  To reach the village we walked across a “gangway” from the boat to the shore then walked up a fairly steep muddy slope to the village. This would not be easy for anyone with problems walking. 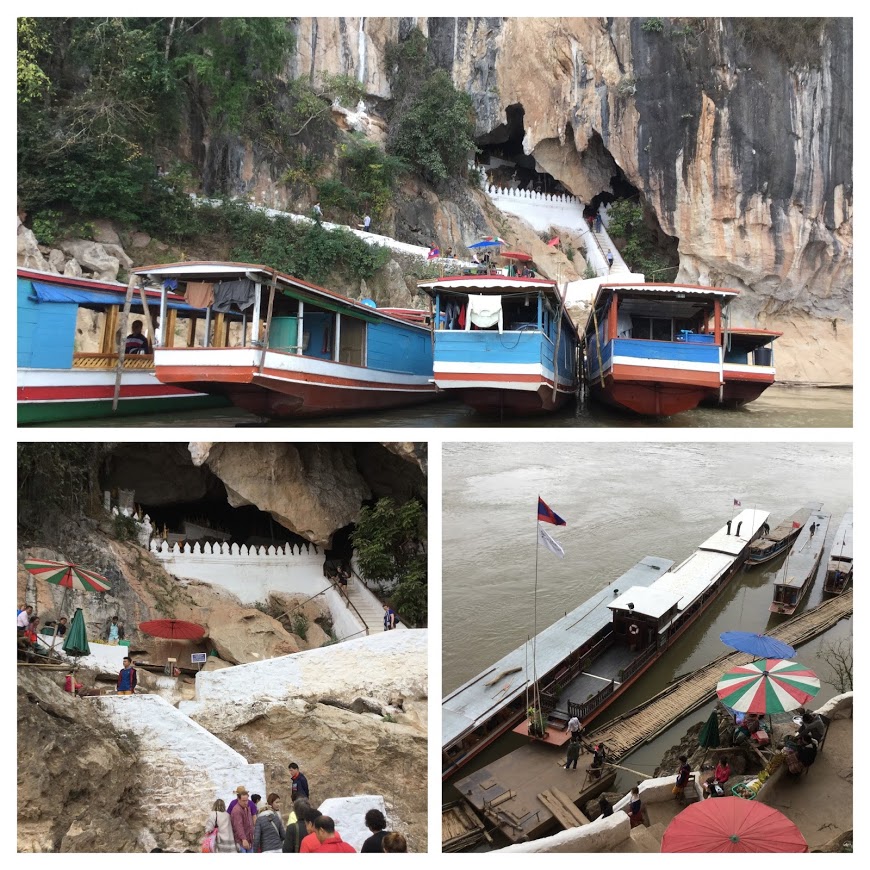 Re-boarding the boat, we continued upriver to the Pakou Caves. Dating back thousands of years this is one of the most respected holy sites in Laos, filled with hundreds of Buddha statues of all sizes.  The highlight of the day for us was the journey up and down the Mekong River, taking in the scenery along the Banks.  We passed villages, water buffaloes and cows grazing in the fields and a couple of elephants at work.

The people farm along the banks of the River at this time of year.  During the rains the river floods and deposits rich silt along the banks which is perfect for growing vegetables and herbs.

Our return trip passed swiftly as we enjoyed a delicious lunch and chatted with our table companion, a young woman from Venice, Italy.  We’ve now added yet another destination to our Bucket List!

Just around the corner from our guesthouse was the Royal Palace Museum  and we managed to visit it in between rain showers.  Set in beautifully landscaped grounds the Palace was built between 1904 and 1909 and was lived in by King Sisavang Vong and his family until the Communist takeover in 1975 when the Royal Family was sent to “Reeducation Camps”. The building was turned into a museum in 1995 and has been well preserved. Unfortunately, no photography is allowed inside the Museum and there are no pictures to showcase the exquisite mirrored walls of the throne room or the Reception Room decorated with murals depicting everyday life in Laos in the 1930’s.  Among the gifts from various countries was a piece of moonrock from the United States.

Bill was really looking forward to seeing the Royal Car Collection but what we found was a few old, dirty cars stuck in an outbuilding!  A Citroen; and a few Lincolns  given to the King by the US. No care has been given to these cars since the King was overthrown.  Definitely disappointing to a car buff!

For those who love Markets, Luang Prabang is hard to beat!  If food is your thing, visit the  Morning Market where the local people buy their produce each morning.  You’ll find everything you can imagine … and some, frankly, you don’t even want to imagine!  Many of the stalls sell exactly the same produce, all laid out on mats on the ground.  Fruit, vegetables and herbs, chilies and eggs side by side with fish (dead and alive), buckets of live frogs, some snakes, pigs feet …. it’s all there, along with the smells!

Around town there are several other day markets selling Lao silk, paper items and locally made handicrafts made by the Hmong people, but the most important daily event is the “Night Market”.  Half of the main street in town is closed to traffic and hundreds of venders set up their stalls on the sidewalk as well as in the street, most of them selling the same items!  We soon found it all too overwhelming and left it to other tourists to fight their way through the crowds and try to figure out the best deal.

We did venture down a narrow lane from the Night Market to have dinner one night.  Along one side of the lane are tables filled with large serving platters of food – noodles, rice, vegetables, meat, sausages, curries and more.  Each vendor tries to attract your attention and get you to buy from them!  When you’ve decided, you’re handed a plate and you help yourself to as much food as you want (or can fit onto the plate!).  The vendor then heats it in a wok, finds you a table and you sit back and enjoy the chaos!  All this … food, entertainment and meeting new people at your table – for $2.00!  You just can’t beat it!

There are many beautiful temples in Luang Prabang and it’s difficult to imagine a more spectacular one than Wat Xiengthong. Located at the confluence of the Mekong and Nam Khan Rivers it acts as the gateway to Luang Prabang and was the temple used for the coronation of Lao Kings.  The mosaics throughout the temple are exquisite, particularly the Tree of Life mosaic.  Remodeling in the 1960’s brought the temple back to its former glory and it is well worth a visit.

Just down the street from our guesthouse was Wat Mai Suwannaphumaham, one of the few monasteries unharmed when a mercenary army from China known as the Black Flag Army, looted Luang Prabang and destroyed many ancient Buddha images in 1887.  One day we happened to walk past when drummers were performing on the verandah.  What a treat!

And so our visit to Luang Prabang came to an end way too soon!  Looking back, we feel we should have spent more than ten days enjoying this special town but then we feel the same way about every place we visit!  We’ll be heading south the Vientiane, the capital of Laos next!