North Vietnam – The End of Our Journey 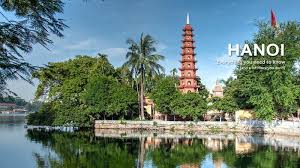 Did we save the best for last?  It’s tough to say for sure since every place on our 6 month, 4 country journey welcomed us with experiences we never anticipated and left us with memories to last a lifetime.  By now we had been traveling for almost six months and, to be honest, we were tired and ready to get back home.

Our last blog is a brief overview of what we did in Hanoi which, from the start, had us mesmerized … at times confused … and always alert when crossing the streets to avoid being hit by motor scooters whizzing by! 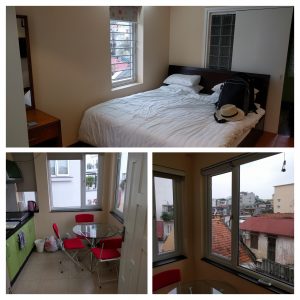 We chose an Airbnb property “In the Heart of Old Town Hanoi” in Hanoi’s Old Quarter and were delighted with our choice.  Our host, Tuan Anh (Ben,) helped us carry our bags upstairs (several flights!) to our large, airy room with ensuite bathroom and a kitchen with cooktop, microwave and fridge as well as a table and chairs – a perfect place for us to work while enjoying a view of the city.

We were excited about being able to cook meals here – the first time on our trip!  However, we knew that life in the Old Quarter took place on the streets and sidewalks and, once settled, we headed outside to find a bowl of beef noodle soup (called Pho, pronounced “fuh”!) 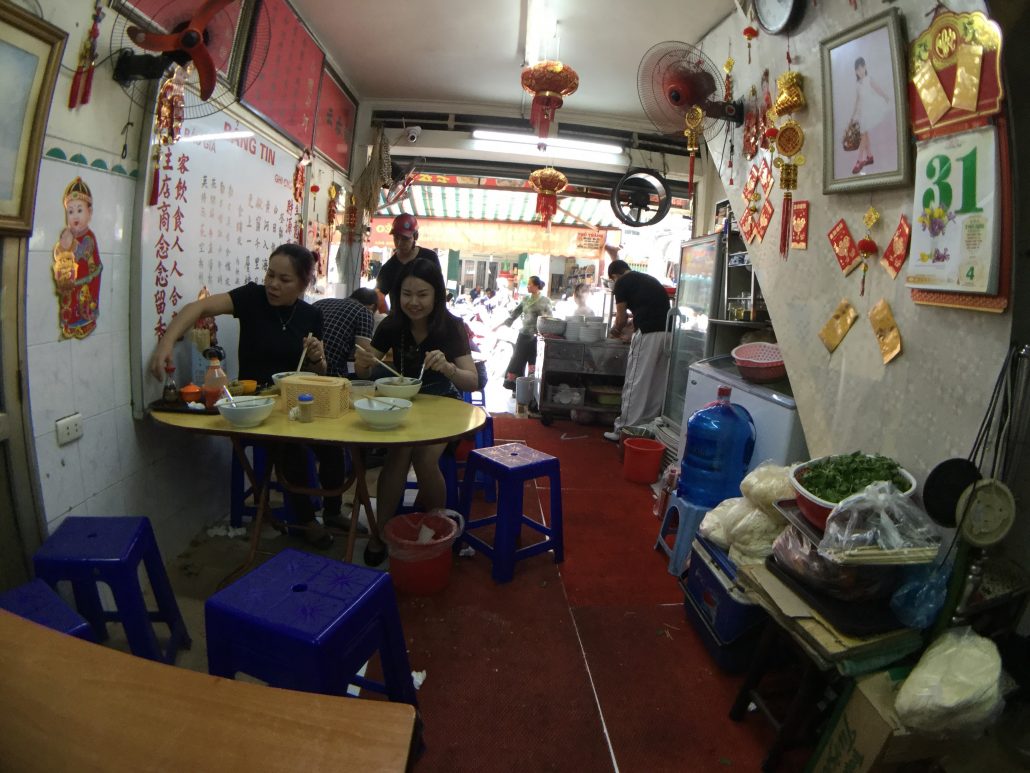 It didn’t take long to find a place catering to locals as well as foreigners.  Just look for a place with a line outside! We sat at a table slurping our soup and talking with a gentleman from Wisconsin and his two adopted Korean sons who were visiting Hanoi for a week.

The only way to enjoy Hanoi’s Old Quarter is to walk which, in itself, is quite a challenge!  We’ve mentioned the street traffic but walking on the sidewalk is just as difficult!  You see, people live and work and eat on the sidewalks, which they consider an extension of their house.  They park their motorbikes on the sidewalk. They sit on low stools at small tables and enjoy coffee or tea with friends on the sidewalk.  They sell food and other necessities on the sidewalk.  And in the evening the sidewalks turn into mini markets where customers drive up on their scooters and buy their dinner before heading home! 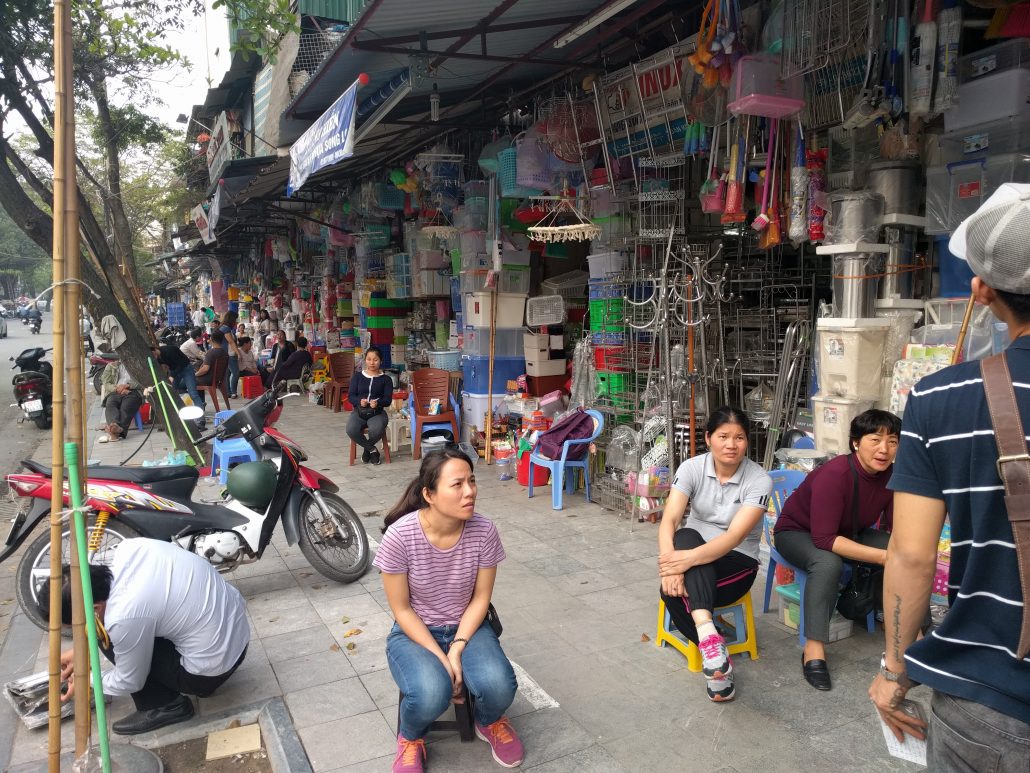 Once we got over the need to get to our destination quickly, we found ourselves stopping to enjoy and capture moments in the mayhem!  We saw beautifully decorated temples and pagodas crammed in between houses, enormous trees that must have been hundreds of years old.  Vendor stalls filled with an incredible variety of fruits and vegetables, providing great photographic opportunities.

Hanoi’s Old Quarter has a fascinating history that spans more than 1,000 years.  It’s been a capital since the 11th Century attracting skilled crafts people who formed cooperatives and set up shops on the same street producing similar products.  The streets are named for the products produced and sold there.  Check out this article by ThingsAsian  for more information.

The Temple of Literature 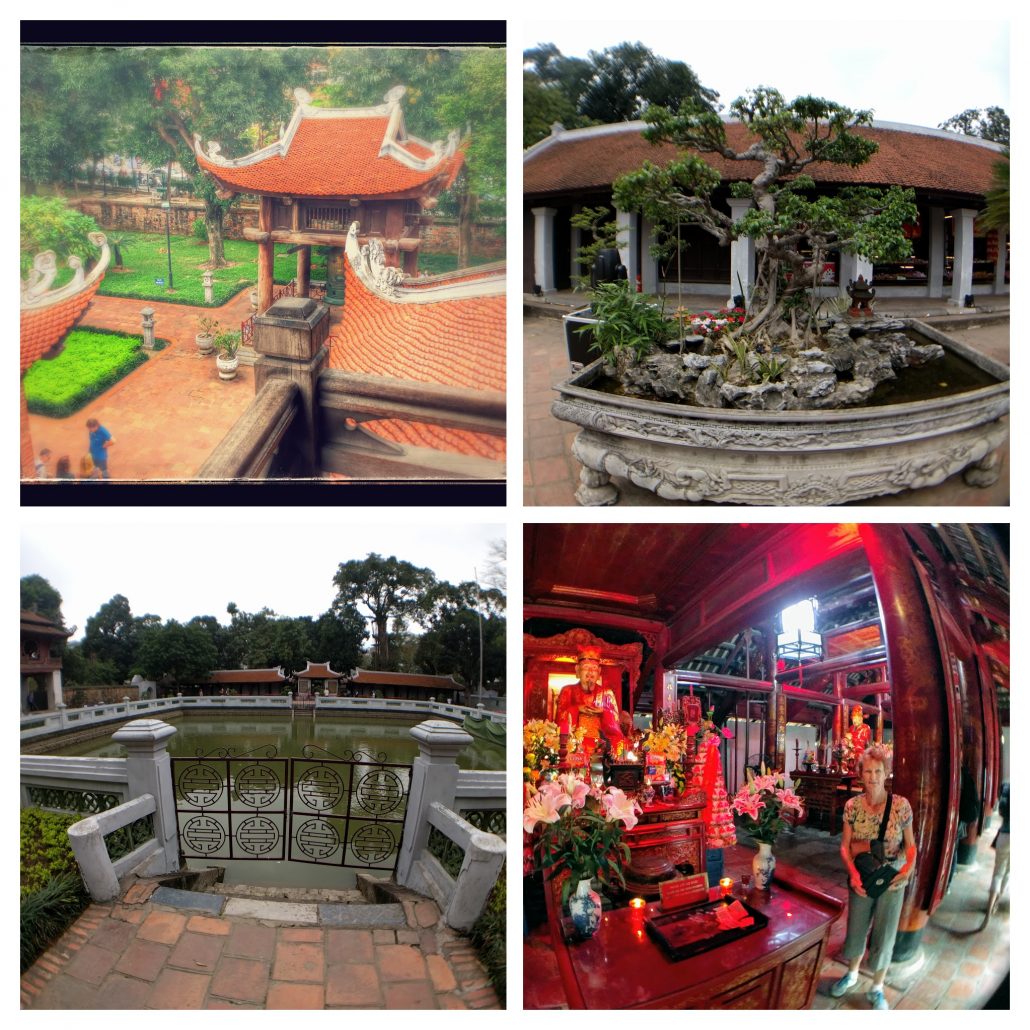 Built as a University dedicated to Confucius in 1070, originally only members of the Royal Family and aristocrats were accepted but later the University was open to gifted students, no matter their status.  The Court appointed well educated mandarins to teach the students.

We walked through the magnificent main gate leading to the first of five courtyards and beautifully manicured grounds.  The entire complex has been renovated many times over the years but we felt it still maintained an atmosphere of learning and respect.

82 stone stelae erected on top of large tortoises are engraved with the names and achievements of successful graduates.  Great emphasis was placed on learning because educated men were considered necessary for the country to remain strong.

The Imperial Citadel was an important historical site for over 1300 years until 1805 when the capital was moved to Hue.  It originally contained the Forbidden City, the Palace where the Emperor lived, as well as other Palaces and Temples but over the years, buildings have decayed or been replaced and few of the original structures have survived.

The French dealt the final blow by demolishing most major structures and replacing them with modern buildings which were used as their military headquarters and barracks. 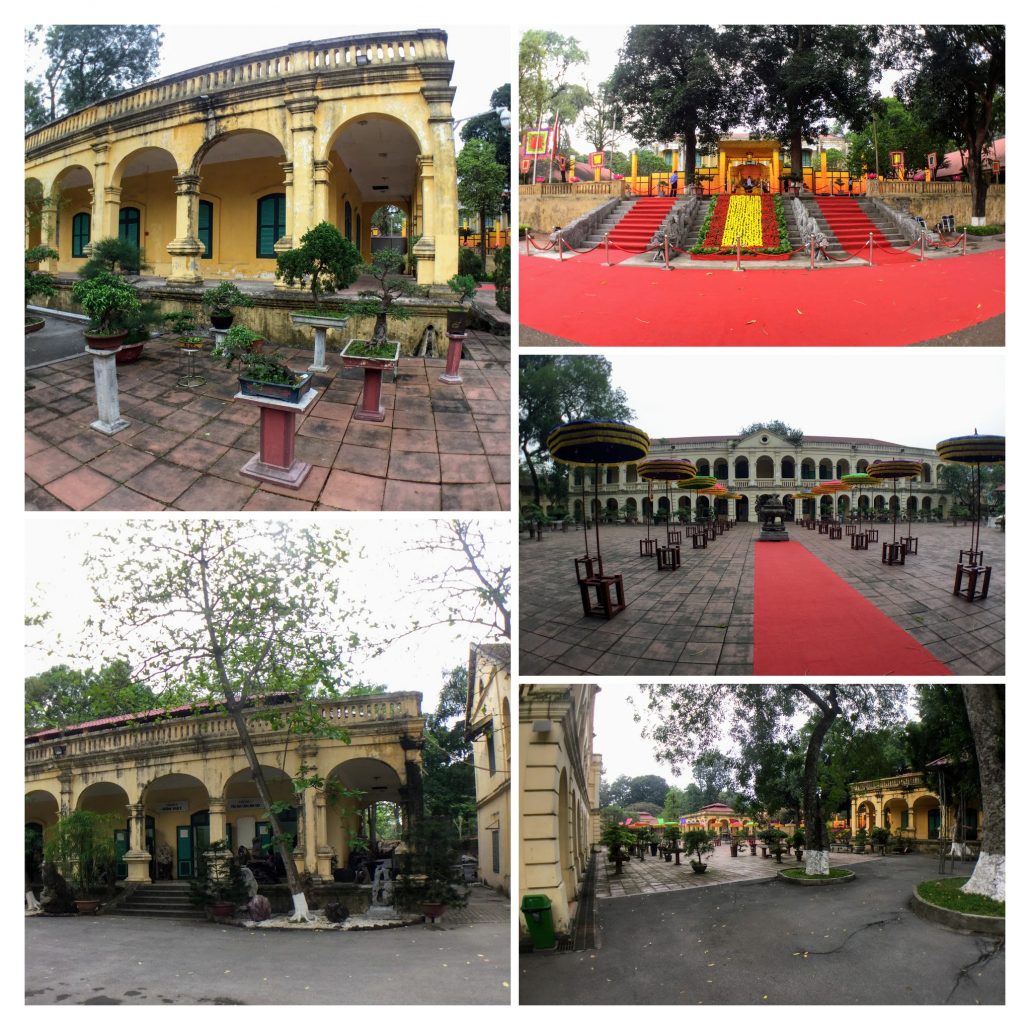 As we approached the South Gate a group of students in their graduation gowns were having their photo taken!  Apparently the Citadel is a choice location for this event. 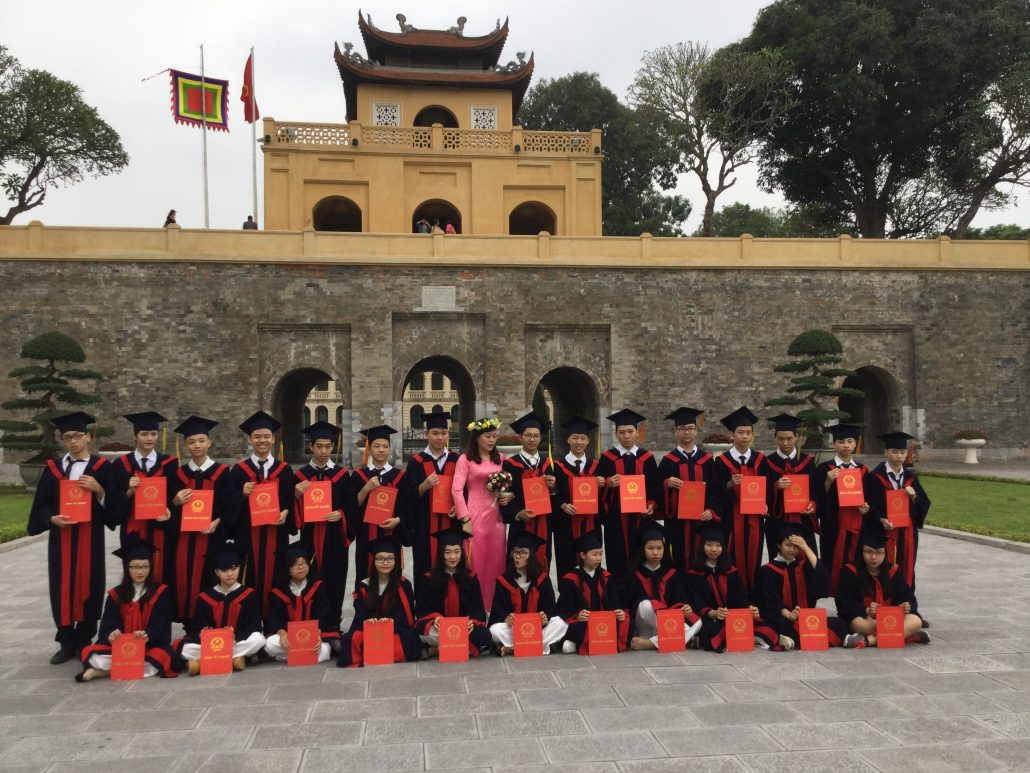 After climbing to the top of the South Gate tower for an impressive view of the complex we spent over an hour walking though the large, well maintained grounds. The bonsais scattered throughout the courtyards and gardens were spectacular. 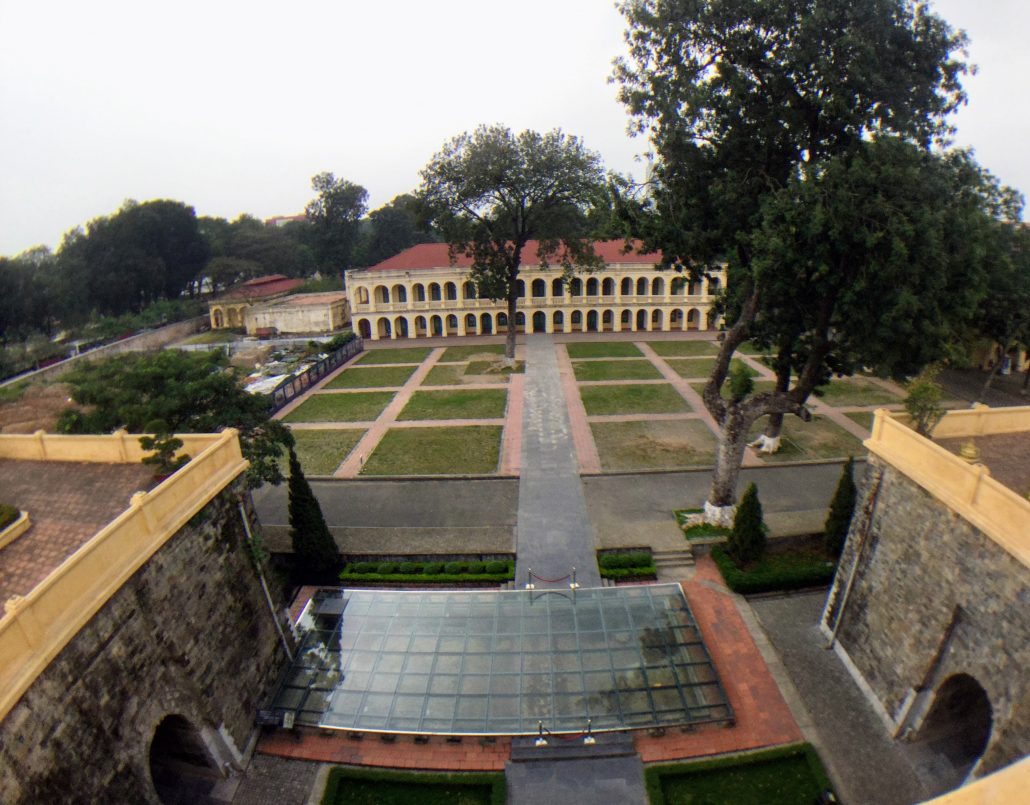 A Museum featuring artifacts from the different dynasties discovered during archeological digs was well worth our time.  So much to learn about this part of the world!

There have been some major changes to this Museum since Priscilla’s visit several years ago.  More than 95% of the exhibit is focused on the French era and the harsh treatment the Vietnamese prisoners endured here. There are very distressing scenes and dioramas depicting this.

However, our interest was in the American military prisoners’ section and this is where the major changes have taken place.  In the past one could see the actual cell area, however, now there is only one gallery with photos, a video, John McCain’s flight suit and a few items such as a bed, eating utensils, etc. used by the prisoners. 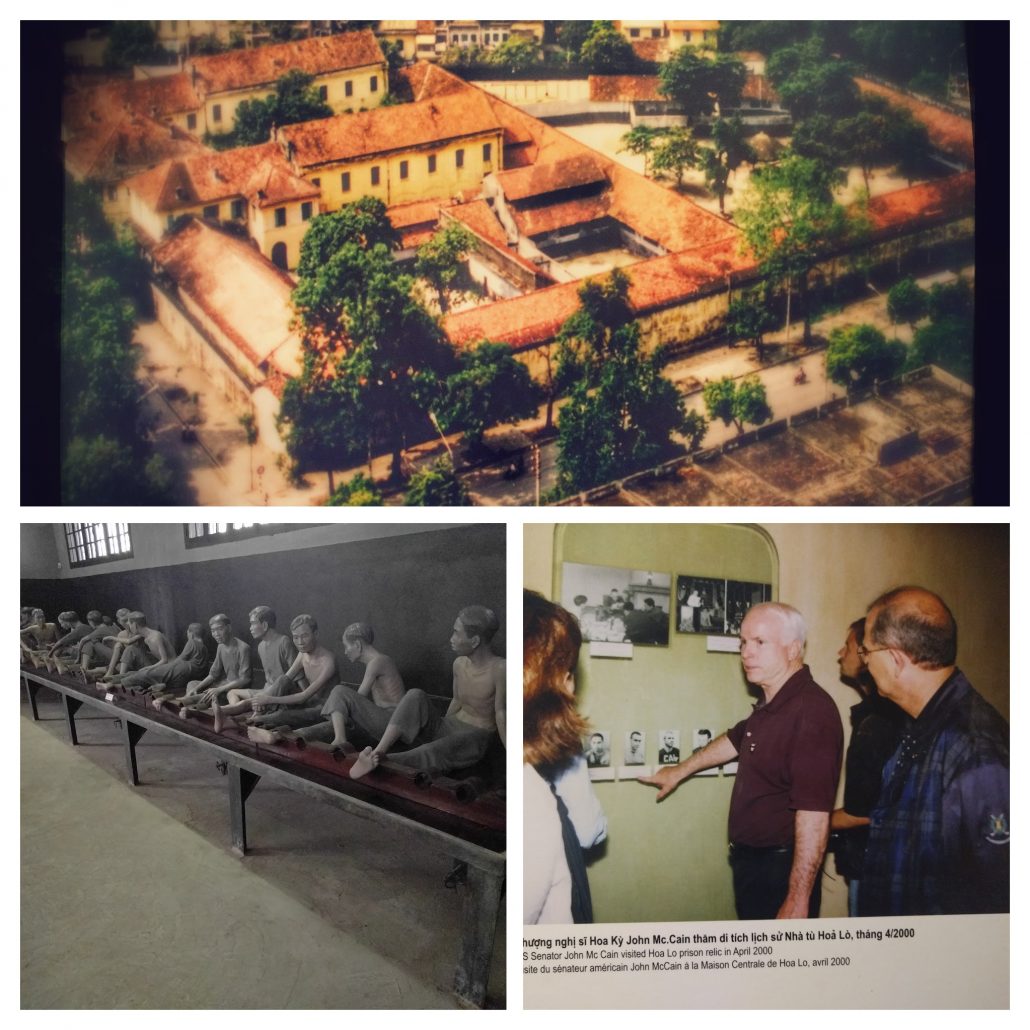 Photos show the prisoners playing basketball, cooking a meal, celebrating Christmas etc.  For the real story check out some of the books written by the captured Americans.  Remember, the country that wins the war writes the history! 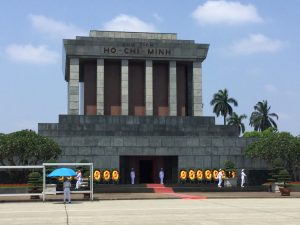 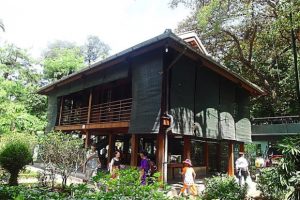 We decided not to view Ho Chi Minh’s sarcophagus but walked past the Mausoleum on our way to the Stilt House.  The Mausoleum is a huge granite, Russian-looking, structure which was built against Ho Chi Minh’s express wishes that he be cremated and his ashes scattered across Vietnam. 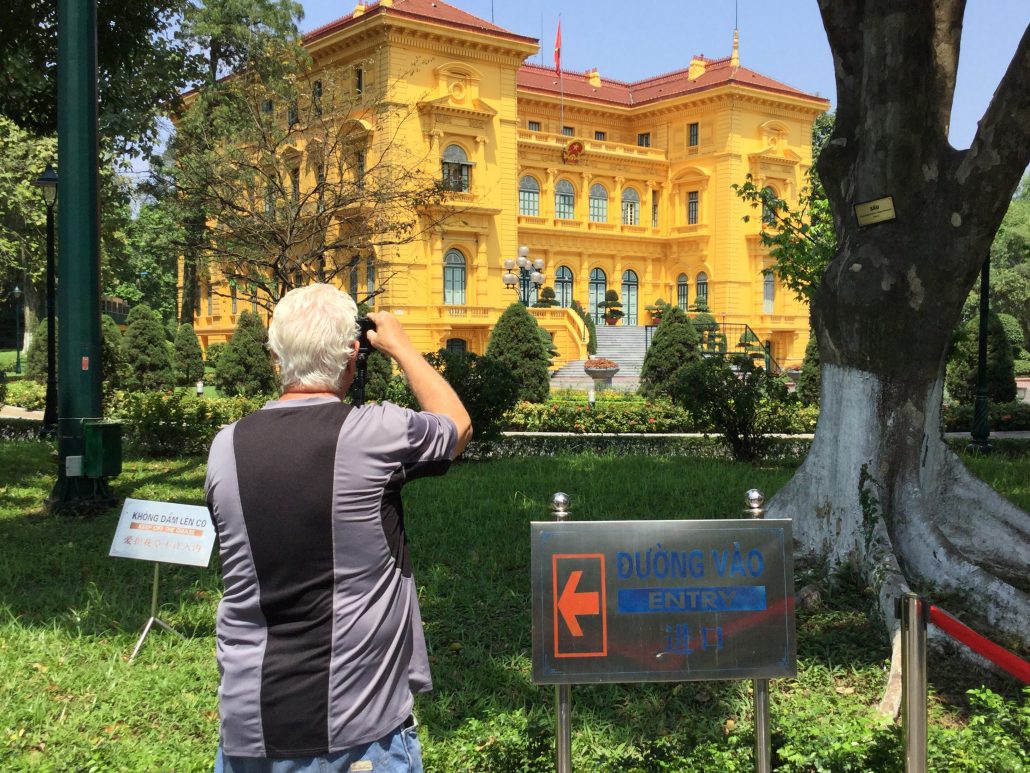 Apparently unwilling to live in the grandiose Presidential Palace previously used by the French Governors, Ho Chi Minh had a simple open-air Stilt House built on the grounds.  Visitors view the meeting room on the lower floor then walk up the stairs to the study and bedroom. The rooms contain a few of his personal effects and remain as they were during the time that Ho Chi Minh lived in the house.

The Water Puppet Show at the famous Thang Long Theater is well worth an hour. This form of entertainment goes back to the 11th Century and originated in the flooded rice fields where the puppeteers, hidden behind a screen and standing in waist deep water, operated the puppets so they looked like they were moving across the water.

The theater production is accompanied by musicians playing traditional Vietnamese instruments and operatic singers recounting the story being enacted.  It’s fun for kids and adults!

A Not So Helping Hand!

We had been warned by our Landlord that some of the cab drivers were less than honest and we found this out for ourselves!  Using Maps.me  on his cell phone, Bill knew exactly how to get back to our apartment from the Citadel.  He noticed we were taking a long way round but were, at least, going in the right direction!  However, when we stopped the taxi close to our destination, the driver reached across and touched the meter and somehow tripled the fare!  We were not impressed and threatened to report him to the Police.  We ended up paying more than we should have but definitely not as much as he was trying to charge us!  Oh well – this was the only time we were ripped off in our six month journey! 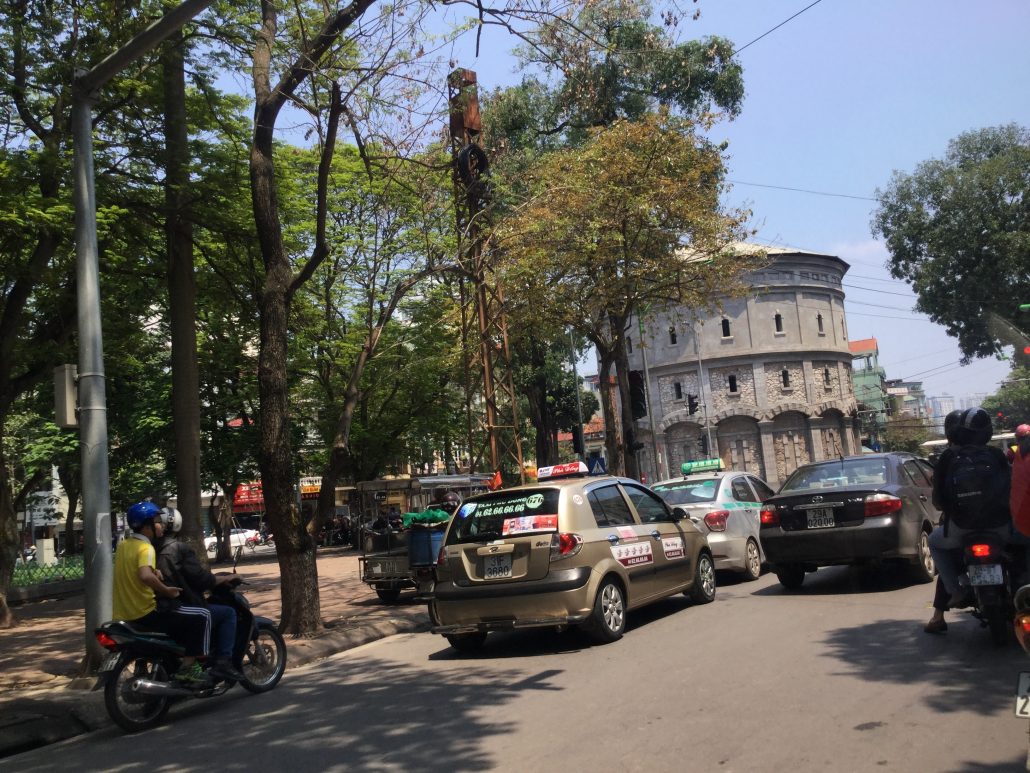 On our visit to the Citadel we had to cross a very busy road.  There were no traffic lights or pedestrian crossing signs and we made a couple of attempts to cross but were intimidated by the large trucks and buses traveling at high speed.  Suddenly a man sitting on a stool on the sidewalk got up, took Bill by the arm and walked us across the street, making the traffic give way to us. How cool is that?!  Who knows how long we would have been standing there without his help!

When it came time to leave we wished we had done more and seen more, eaten more pho, taken more photos, learned more Vietnamese phrases ….! But, to be honest, we were tired and we needed the comfort of our own home, the Supermarket around the corner with familiar foods that we recognize, our “stuff” where it’s supposed to be! 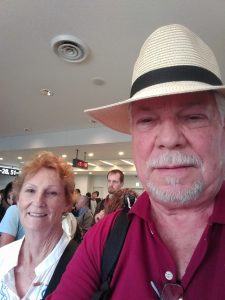 Travel stretches you in many ways and by this time we had been stretched far enough!

So, as we crammed ourselves into the airline seats that would be our ‘home’ for the next 24 hours or so, we promised ourselves we’d take it a little shorter and a little easier next time.  Let’s see how well we stick to our decision!