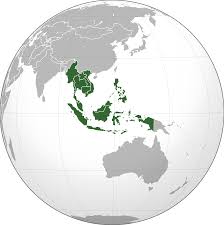 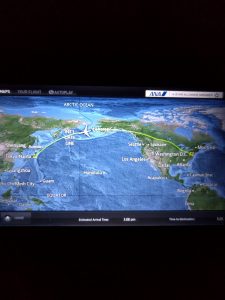 The answer is a resounding “YES” – for the most part! But there are always challenges to overcome and circumstances to adjust to, no matter how well traveled one might be. Take, for instance, the first four days of our six month adventure in Southeast Asia. It was quite a marathon! 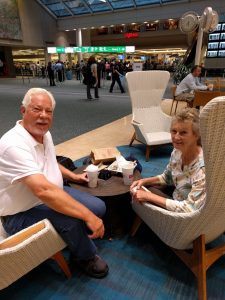 Day 1: We were up at 6:00am and driven by a good friend to catch our 9:00am flight from the Orlando Airport to Washington Dulles Airport. With the help of a United Airlines representative, our check-in was quick and easy and we had plenty of time to relax with a coffee and a light breakfast. We were surprised to find that we had been ‘randomly’ selected for the TSA Fast Pass and were soon at the Gate standing in line #4 for boarding. Flight time: 2 hours 9 minutes.

We transferred at Dulles Airport to our ANA flight to Narita and were interested to learn that Economy class passengers all boarded at the same time instead of being called by row number. We saw people lining up but didn’t realize what was happening! By the time we got on board we only just had room to store our two back packs overhead! Lesson learned for our next connection in Narita to Bangkok! Flight time: 14 hours 5 minutes.

Day 2: Crossing the dateline brought us to Bangkok at 11pm. Total flight time: 16 hours 14 minutes – approximately 20 hours with layovers. Our minds and bodies had no idea where we were or what time it was! Airport pick-up, a quick shower and into bed around 1:00am. No wonder we were a couple of basket cases!

Day 3: Our hotel was located near a Mall where we had a Thai style late breakfast – wonderful broth with vegetables and seafood cooked right at the table! 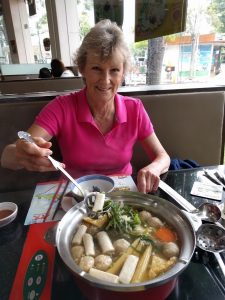 This definitely rivals Chicken Noodle soup and gave us the boost that we needed to head off to our next hotel across town near the Railroad Station. We had booked a Guest House in Chinatown near the Station since we were catching a train the next morning to Chiang Mai, some 360 miles (580 kms) and ten hours north of Bangkok. Our taxi ride took over an hour (the traffic in Bangkok is worse than Los Angeles!) and cost Bhat 350 ($10 including tip)!

The challenge was finding the guesthouse! The reviews we read never mentioned that the road ends a little way from the guest house and you have to walk to it through narrow streets and alleyways! That’s fine if you don’t have baggage – or if you are a young backpacker. Well – we made it! We checked into our air-conditioned room which was clean and comfortable then headed off to the railway station, just a ten minute walk from the hotel, to pick up our rail tickets. Come to find out we had reserved tickets for the wrong day so paid a small change fee then headed back to the guest house. We decided to take a Tuk Tuk instead of walking and bargained with the driver for what we thought was a good fare. Come to find out we had been overcharged by Baht 50 ($3!) Oh well – it’ll take time for us to figure out what things cost.

Instead of returning to the guest house we learned there was a Vegetable Festival taking place nearby in Chinatown. This only takes place once a year for ten days. A friendly Thai gave us a free ride on a golf cart along with some other people and said he would be back to pick us up at the end. The end of what, we wondered? We were soon to find out.

An entire street was filled with food stalls, all selling different vegetarian food – some hot, some cold. People crowded around the stalls and filled the street. Music was blaring, people shouting out for attention, cars and scooters driving down the street — it’s surprising no one was run over! We chose a couple of different dishes and sat at a table on the sidewalk to eat.

Suddenly a Parade formed and a dragon appeared! 2 poles were raised in the street and men climbed up on one, tying themselves to the pole. What on earth was going on? Check it out here. A fire-breathing dragon, fireworks, bands playing, drums beating …. it was quite a sight to see. And then it was over and our friendly driver took us back to the guest house where we enjoyed a beer on the Roof Top Restaurant, watching the dinner cruise boats decorated with colored lights sail up and down the Chao Praya River.

Day 4: Shortly after leaving the hotel on foot we caught a Tuk Tuk to the Railway Station where we had coffee while waiting for our train to arrive. At 8:00am music started playing and everyone stood up. Twice a day the national anthem is played on TV, Radio and in public places like the Railroad station and it is polite to stand. The King is very much revered in this country. 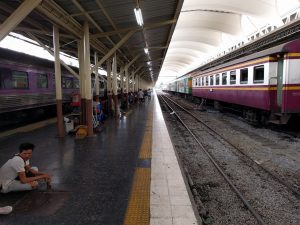 The 10+ hour train journey was quite comfortable and we enjoyed the scenery along the way. Lunch and two snacks were served and we read, napped and chatted with a couple of Germans and a Brit who were traveling to Chiang Mai. The only complaint we had was the state of the toilet facilities which were, frankly, disgraceful. Our hotel was literally a few yards from the station and we were soon checked in and enjoying dinner at the restaurant next door before falling into bed hoping that we’d sleep through the night … which we didn’t!

Did we try to do too much too quickly? Perhaps at our age we should have paced ourselves. It’ll take us a while to get over our jet lag but in the meantime we have to focus on finding an apartment for the two months we’ll be in Chiang Mai. Once that’s done we can relax and begin to appreciate the joys of travel!